Critically thinking about the corona virus

Your "larger point" has not changed in 15 months. You'd think given the facts you might adjust it slightly. But then facts have never troubled you in the slightest.

Funny how, just as I predicted, ongoing deaths and those elusive "cases" both seem to be now occurring almost exclusively among the unvaccinated.

Science-denial has done wonders for you.

I sincerely hope (because I don't take delight in other's suffering) that you do escape untouched by Covid. You will of course never recognize that it was those very lockdowns and vaccinations that you decry that saved you, but I also know if the 'miracle cure' appeared tomorrow and someone other than your 'sources' discovered it, that you'd still avoid it. C'est la vie.

And if things go for you the way they went for Rand Paul, Magufuli, Ted Nugent, Ron Wright, Ben Carson, etc., etc., etc., well...not gonna bother with the I told you so's either.

This is propaganda writ large.

Business Insider has raised a total of $55.6M in funding over 7 rounds. Their latest funding was raised on Jan 29, 2015 from a Venture - Series Unknown round.
Business Insider is funded by 15 investors. Jeff Bezos and ESO Fund are the most recent investors.

Bezos has made gazzilions off of this scam.

Of course your side is winning. You're outspending my side a trillion to none! All we have is the internet and you're doing your best to shut it down. FREEDOM!
“Trust the science fiction.”
Top

'Course you can always take Ivermectin.

In conclusion, there is evidence that serious neurological adverse events can occur with ivermectin beyond the treatment of O. volvulus complicated by concomitant high burden L. loa infection.

Funny how there's a risk with everything, and living your best life requires making constant individual decisions about what gives you the best chance.

Sure glad I used my own judgement and the advice of people who actually know what the fuck they're talking about. But then it's always served me well...

So they made it up, then? So those people aren't really dead? What a relief!

I trust the same people have gotten to the NY Times as well, and these "facts" are also utter horseshit:

This series suggests that serious neurological adverse events observed with the use of ivermectin in the treatment of onchocerciasis may not be entirely explained by concomitant high burden loiasis infections.

Nothing about treating Covid.

Look, the fuck I know about it. I read it can help the Covid and if you want to take Ivermectin or M&Ms, that is your right to treat your body the way you want. Hey, if you want the experimental vaccines go ahead. But it isn't as if there aren't warnings regarding it's safety. And that is for treating Covid, not river blindness in Africa.
“Trust the science fiction.”
Top

toomanyhatz wrote:So they made it up, then? So those people aren't really dead? What a relief!

I trust the same people have gotten to the NY Times as well, and these "facts" are also utter horseshit:

You must see it's pro-vaccine propaganda. Yes, some people are sick and dying from Covid it says. But how many are dying from tuberculosis or malaria or all kinds of actual deadly diseases? Don't those victims get any respect? Whose dick did Covid have to suck to get all that free publicity? Kind of like how no one would know about multiple sclerosis if not for Jerry Lewis.
“Trust the science fiction.”
Top

You think this shit is ending? We ain't seen nothing yet. Covid is just a trial balloon.

As the world faces three major threats, namely the COVID-19 induced public health and economic crises as well as the ongoing climate emergency, the business world is in a position to make real positive change.

As COVID-19 spread […] governments introduced lockdowns in order to prevent a public-health emergency from spinning out of control. In the near future, the world may need to resort to lockdowns again – this time to tackle a climate emergency […] To avoid such a scenario, we must overhaul our economic structures and do capitalism differently. ...

COVID-19 is itself a consequence of environmental degradation ...

The razing of forests and hunting of wildlife is increasingly bringing animals and the microbes they harbour into contact with people and livestock.

Under a “climate lockdown,” governments would limit private-vehicle use, ban consumption of red meat, and impose extreme energy-saving measures, while fossil-fuel companies would have to stop drilling.

To avoid such a scenario, we must overhaul our economic structures and do capitalism differently […] Addressing this triple crisis requires reorienting corporate governance, finance, policy, and energy systems toward a green economic transformation […] Far more is needed to achieve a green and sustainable recovery […] we want to transform the future of work, transit, and energy use.

we are approaching a tipping point on climate change, when protecting the future of civilization will require dramatic interventions […] One way or the other, radical change is inevitable; our task is to ensure that we achieve the change we want – while we still have the choice.

The cure is worse than the disease - - - again.

COVID-19 RNA Based Vaccines and the Risk of Prion Disease

In the current paper, the concern is raised that the RNA based COVID vaccines have the potential to cause more disease than the epidemic of COVID-19. This paper focuses on a novel potential adverse event mechanism causing prion disease which could be even more common and debilitating than the viral infection the vaccine is designed to prevent ...

We're from Pfizer and we want to help you.

Pfizer has been accused of “bullying” Latin American governments during negotiations to acquire its Covid-19 vaccine, and the company has asked some countries to put up sovereign assets, such as embassy buildings and military bases, as a guarantee against the cost of any future legal cases, according to an investigation by the U.K.-based Bureau of Investigative Journalism.

Nigeria Trovafloxacin lawsuit
Main article: Abdullahi v. Pfizer, Inc.
In 1996, an outbreak of measles, cholera, and bacterial meningitis occurred in Nigeria. Pfizer representatives and personnel from a contract research organization (CRO) traveled to Kano to set up a clinical trial and administer an experimental antibiotic, trovafloxacin, to approximately 200 children.[177] Local Kano officials reported that more than fifty children died in the experiment, while many others developed mental and physical deformities.[178] The nature and frequency of both fatalities and other adverse outcomes were similar to those historically found among pediatric patients treated for meningitis in sub-Saharan Africa.[179] In 2001, families of the children, as well as the governments of Kano and Nigeria, filed lawsuits regarding the treatment.[180] According to Democracy Now!, "[r]esearchers did not obtain signed consent forms, and medical personnel said Pfizer did not tell parents their children were getting the experimental drug."[181] The lawsuits also accused Pfizer of using the outbreak to perform unapproved human testing, as well as allegedly under-dosing a control group being treated with traditional antibiotics in order to skew the results of the trial in favor of Trovan. Nigerian medical personnel as well as at least one Pfizer physician said the trial was conducted without regulatory approval.[182][183]
Last edited by Jimbo on 11 Jun 2021, 04:28, edited 1 time in total.
“Trust the science fiction.”
Top

What happens if something goes wrong after you receive a Covid vaccine?

The bottom line is that if you are injured by a vaccine or other "countermeasure" designated by the DHHS Secretary as intended for a pandemic or bioterrorism threat (Covid-19, Pandemic Flu, Anthrax, Smallpox) your options for receiving any financial benefit are very limited. ...

The cure is worse than the disease - - - again.

And you call the mainstream press sensationalist.

Here's the mainstream for you. 60 Minutes caught editing out the words of the Florida governor all to preserve their horseshit narrative.

Follow the money. It's all about the money. Come on. So much money flying around in that world. They're getting paid. A lot!

Daszak’s EcoHealth Alliance funded bat coronavirus research, including virus collection, at the Wuhan Institute for Virology (WIV) and thus could themselves be directly implicated in the outbreak.

Instances of under 30s catching the illness are nearly nil. Q. Why then would they need a vaccines for it? A. Follow the money.

NEW POLL: Will you fly with @British_Airways
if the company requires you to show a #VaccinePassport?

The UK’s National Health Service has received new instructions from the government on how it should record Covid19 “cases”, separating those who are actually sick from those who just test positive.

... totally in keeping with the trend of altering Covid practices to create the impression the “vaccine” is having a positive impact. 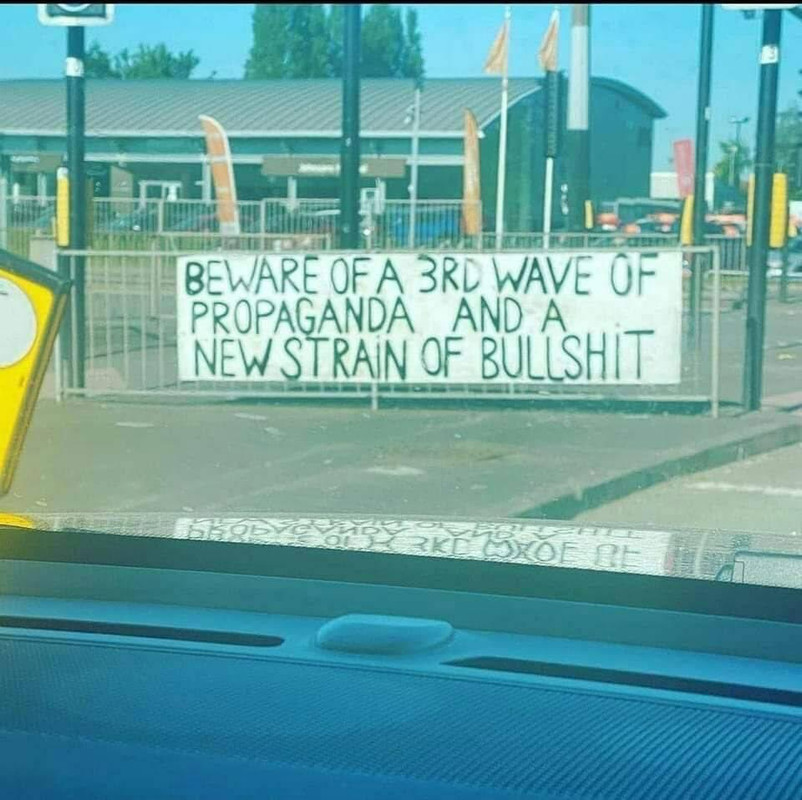 Acquiescent musicians have been my greatest disappointment in this affair. Fuck 'em. To date, no high-profile artists have dared to speak out against the new pharmaceutical apartheid measures being forced through in parts of the United States.

Perspectives on the Pandemic | "Blood Clots and Beyond"
“Trust the science fiction.”
Top
Post Reply
2920 posts