in reality, all of this has been a total load of old bollocks
Post Reply
334 posts

Positive Passion wrote:He is proving again what a git he is.

Why? You should applaud him for telling the truth.

Isn't that what he is supposed to do?

But the real point is that all his actions that are in the public eye have been entirely self-serving and not in the best interests of anybody else - travelling to Durham, taking part in SAGE meetings, illegally proroguing parliament - not the govt he was employed by, not joe public and not the more abstract concept of the "nation". Speaking "the truth" now is part of the same pattern.

Of course you don't ignore what he says, but you have to recognise that he is saying it for his own self-interest.

And even then we didn't really need him to tell us the "truths" that Hancock should be fired or that Johnson is unfit to be PM.
Top

Positive Passion wrote:
And even then we didn't really need him to tell us the "truths" that Hancock should be fired or that Johnson is unfit to be PM.

No, we don't, but perhaps some other people do.
Bugger off.
Top

The vaccine uptake in Australia has been very slow. Government has determined that all over-50s will get AstroZeneca, anyone else under that age Pfizer. That has led to a great reticence of the elderly to get vaccinated as there's still a lot of debate about the safety and accuracy of AZ.

Since last week there is a mass vaccination hub opened at Olympic Park here in Sydney. First week only for AZ-vaccinations, now also for Pfizer. Lots of pushing for people to get the vaccine but not much happening....

....until Melbourne had to go into shutdown on Friday for a week after a sudden outbreak of COVID in the northern suburbs.

I'm here at that hub getting my vaccine and the lines are incredible!
Nothing like a good old fashioned bit of scaremongering to get people moving.

Yesterday, my pal was asked to remove her mask at the checkout at Sainsbury’s to prove she was old enough to buy alcohol.
She's 54.

Samoan wrote:Yesterday, my pal was asked to remove her mask at the checkout at Sainsbury’s to prove she was old enough to buy alcohol.
She's 54.

I bet that made her feel good.

I've had my second jab. Wahey!
Bugger off.
Top

Samoan wrote:Yesterday, my pal was asked to remove her mask at the checkout at Sainsbury’s to prove she was old enough to buy alcohol.
She's 54.

That's funny. Just made me realize something: At our pot dispensaries, you must show id, usually your health card, to prove you're old enough to be there. I'm 60 FFS.

But EVERYONE must show id.

Sometimes living by the rules just makes for strange situations.

Local stores are now having signs on the door saying if you're fully vaxxed, you can go maskless. It's an odd situation, because plenty of vaxxed people prefer to be overcautious and plenty of non-vaxxed people don't want to wear masks. I wish I knew that the unmasked are fully-vaxxed, but I also know that 100% certainty is always going to be impossible.

I just kind of do what I've done the whole time, which is be cautious indoors in poorly-ventilated places, and do whatever's most comfortable for the folks around me if I'm at a large gathering outside.

There's some folks who hate the words 'new normal,' but I think it's inevitable that there will be one. It's just going to take some maneuvering to find what works best for the biggest majority of people.

The whole I'm over 50 and still need to see an id is getting old. See it everywhere these days. It's f*cking ridiculous, just say we need to make sure you have an id on you to buy weed or alcohol.

Actually just got lunch in town and its the first place in awhile where I saw must have a mask(vaxxed or non-vaxxed). Basically all the places around here have if your vaxxed no mask required. I will still wear a mask in certain stores based on where I'm at. If I see lots of people wearing one I tend to also. However, I'm doing very little indoor shopping or eating so really hasn't been much an issue as I don't wear one outside( I guess maybe if I'm at a crowed place outside and staying in the same spot for awhile but that hasn't happened). The question is what will I do 4th of July weekend. I've pulled the trigger on a large festival (Peach Festival). Lineup if your interested 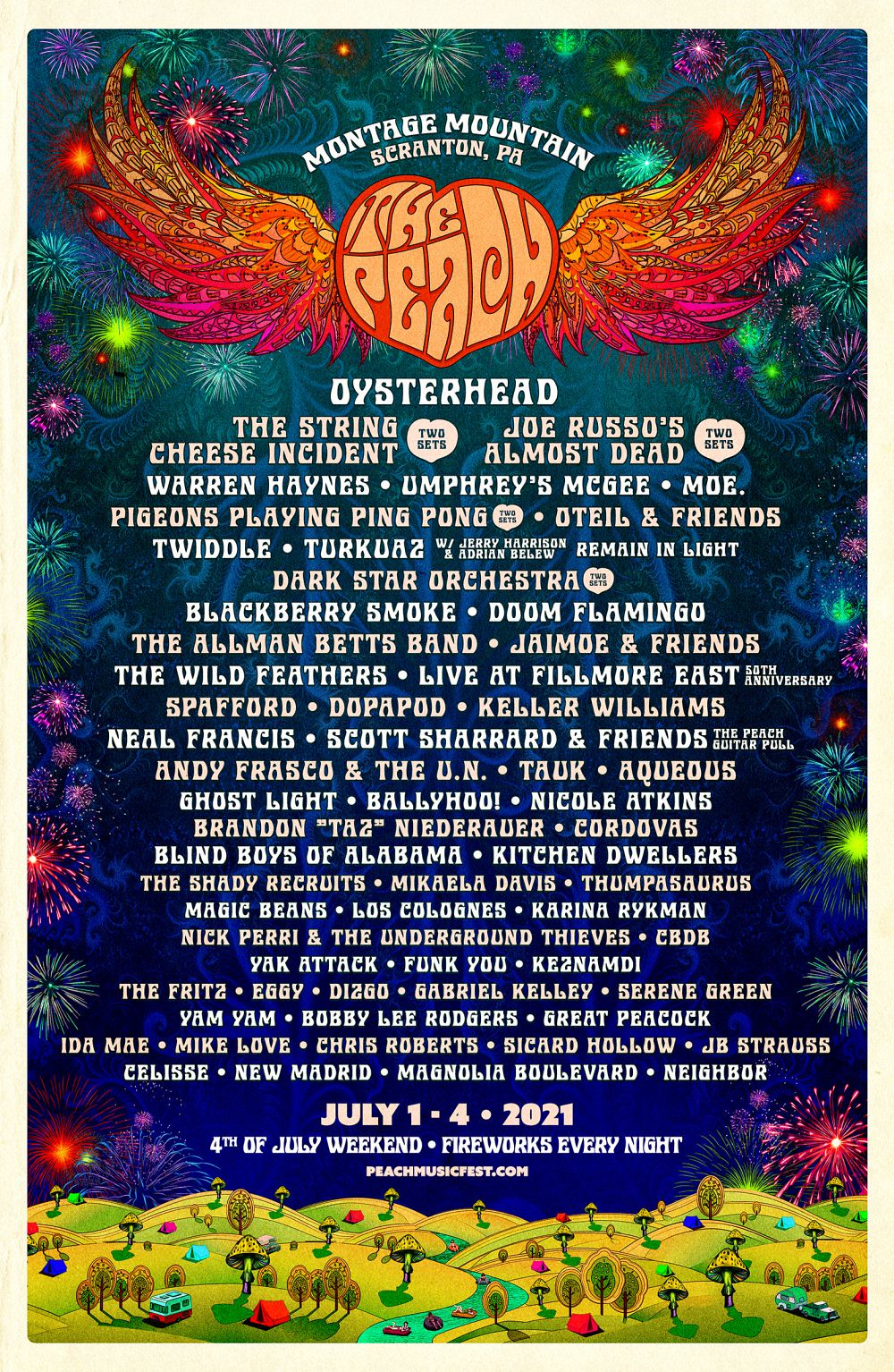 I plan to walk around a lot so not by the same people all festival but the major final acts I'll have a seat and can see myself with a mask as its under a tent I believe.
Top

By now (in my part of the world), if you want to be vaccinated (and aren't precluded by your age or immune system), you can be. If stores or restaurants don't ask for masks (and a lot of them don't by now), then I don't really see a reason to wear one unless their employees/cashiers/servers are wearing them. If they feel the need to for whatever reason, then I'll happily reciprocate for their own peace of mind. There's one place in town that's still being super hardcore, requiring everyone to wear masks, enforcing occupancy limits, and all the rest. And that's cool, I respect it. But until there's a variant that is resistant to the vaccines or some other major change, I've always got a mask on me, but I don't really see the point in it. If you're in the States and aren't vaccinated by now, that's your doing and it's on you to protect yourself.

the Variant is the Vax; life is an intelligence test, tick tock...
A Carrot Is As Close As A Rabbit Gets To A Diamond
Top

I could easily lose my rag this week on the people-dodging grocery shop even though I go early. There's too many arseholes without masks, even when challenged and I do.
" I have Asthma, I'm excluded !". Then I noticed what he was buying - he had 4 bags of British BBQ (

) wood tucked under his arms. Asthma, my arse. That'll do your asthma good.
I too am asthmatic so I have no idea what stunt he was trying except that he forgot to take a mask with him on leaving home.

Anyone read or see on Sunday morning TV, Andrew Marr talking about catching the Delta variant and it flooring him good for 10 to 14 days even though he'd had his 2 doses of Pfizer well before this ?
He's since written this article.

Samoan wrote:
Anyone read or see on Sunday morning TV, Andrew Marr talking about catching the Delta variant and it flooring him good for 10 to 14 days even though he'd had his 2 doses of Pfizer well before this ?
He's since written this article.

Here in Spain they've changed the rules about mask wearing. We can now go mask-free out of doors so long as we can maintain a distance of 1.5 metres from other people. Trouble is, no-one knows exactly what that means. In the street you're bound to pass people at a shorter distance so do we have to wear a mask then?
Surprisingly to me, a small majority of people seem to be continuing to wear masks at all time. I don't. When I go into a shop or the gym etc. I put mine on but not in the street. I think the science is clear that almost no transmission occurs between people in close proximity for very short periods of time, and especially in the open air. If anyone stops to talk to me, I'll put on a mask, but otherwise I feel sure it's not necessary.
Bugger off.
Top

3295 positive cases in Scotland yesterday which from a population of 5.5 million is pretty mindblowing.
Can't be far from the worst numbers in the world.
The combination of the delta variant, the England v Scotland match 11 days ago and perhaps schools appear to have been the perfect storm.
Tellingly hospital and death numbers have not increased greatly so no one seems greatly bothered with vaccination continuing as before.
Fortunately, from a covid point of view, Scotland have been eliminated from the Euro's and the Schools have broken up for their summer holidays so hopefully we will see the case numbers start to reduce but the speed of spread of this variant would cause devastation in countries with low levels of vaccination. The covax programme needs to kick on.
Some mother's talking 'bout Guns' n 'Roses
As if i give a fuck
At best i think they suck
Top

We have been deregulating for a little bit in this province (Quebec). With the bars/restaurants now open, while our beloved Canadiens hockey team has made it to the Stanley Cup finals (something they haven't achieved in a very long time), I was a bit uncomfortable with the whole situation. Sure, freedom is almost priceless and I have participated my share, but so many unmasked people reveling all over the place make for disaster in my risk averse numskull.

So far, I have been proven wrong, once again. For the province as a whole, population 8.5mln, there were 71 new cases yesterday, and 4 deaths. These numbers are on par with those of the past week or so, even a bit lower. The 4 deaths were from prior to yesterday, so, none yesterday. About 122 cases are in hospital. Overall, I believe we are doing better than most of the rest of Canada - but of course it's not a contest, just a measure for reference.

All that is pretty good and I hope it continues.

Getting my second Pfizer jab next week and I can't wait. We're doing pretty well on the vaxxing front which goes a long way to explain the reversal of our situation (at the beginning, we were one of the worst areas in the country).