Mads Mikkelsen is not the first international movie star from Denmark. In the early days of cinema, the 1910's, Denmark was one of the world's leading film exporters, and Asta Nielsen became the first international superstar. Among the men, Valdemar Psilander was enormously popular. He signed with Nordisk in 1910 and racked up a staggering 83 films, before he died at the early age of just 32. At the time of his sudden and premature death, Nordisk had 16 unreleased films of his in the can, which were then released posthumously, something that further contributed to his legendary status. Among his big hits were "Ved fængslets port" (1911), "Dødsspring til Hest fra Cirkus-kuplen" (1912), and "Klovnen" (1917). Psilander excelled at melancholic roles, where he succumbed to the temptations of femme fatales or chose a life of crime. Many of his best films can be streamed for free at http://www.stumfilm.dk 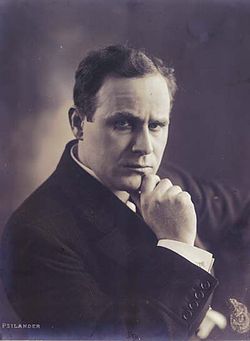