Return of the Festival - Peach Festival 21

Return of the Festival - Peach Festival 21 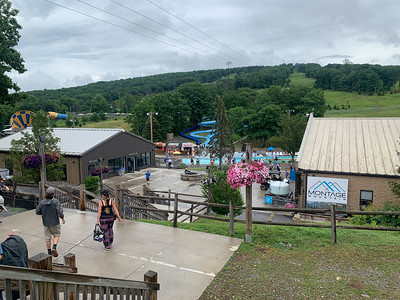 The Peach Festival started 9 years ago by the late great Gregg Allman along with he evil Live Nation and is held at the Montage Mountain Water Park and Ski Resort, Scranton, PA . I've always skipped it but have friends that go every year and claim it to be a great festival. I was going to go last year before Covid hit but hotels were expensive and I'm not camping or RVing (although could see doing this). However, when the same basic lineup was announced and now cheaper hotels I was in. I'm not really a jam band guy but have always listened to plenty including the last few years getting into a new generation of jam bands. The draw for me was Oysterhead ( Trey from Phish, Stewart Copeland and Les Claypool), Turkauz with Jerry Harrison and Adrian Belew covering Remain In Light, Pigeons Playing Ping Pong, two dead cover bands, Umphrey's McGee and a variety of Allman/Betts family bands.


The Peach Festival , Scranton, PA 7/1 - 7/5/21
We started Thursday Night with Twiddle. A band my friend Dawn knows and got her Wook on stage. The wook got pictures with a bunch of the musicians from the bands that played. 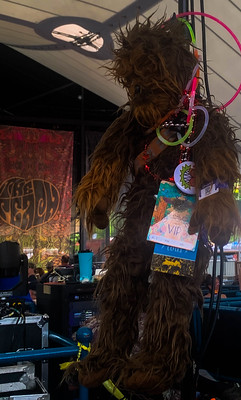 Twiddle were impressive mixing rock, jazz, bluegrass, reggae, and funk. Mihali Savoulidis guitar and vocals covers lots of ground from basic blues riffs to shred guitar. Ryan Dempsey keys and organ along with the drummer and bass player all have their own jam style. I thought their live show was better than their studio songs mostly because they jammed them out as a cohesive unit.

Twiddle with Wook @ The Peach

Twiddle- Lost In The Cold (from Album)


Pigeons Playing Ping Pong are a funk style jam band from Maryland who have been around since 09 although I started hearing about them a few years ago. They are a high energy psychedelic funk band playing endless intense jams.


Dark Star Orchestra played a set between PPPP 2 sets. DSO are a dead cover band who are quite good but still they only play dead (they were the better of the two dead bands and if you like the dead you should give them a try). I was expecting more of a bigger band. However, they kept us entertained as we sat back in the taper section with some friends occasionally getting up to dance. We stayed there for the rest of the night thru another set of PPPP although left early.

After an early set by Nicole Atkins (saw Nicole once at a Tom Petty Fest) we went over the the mushroom stage for the bizarre Thumpasauraus.
Thumpasauraus are a comedy style funk band who are quite fun to watch. Seems the sax has really made a comeback they had a little Comet is coming and Zappa in them.

50 Year anniversary of Live at the Fillmore East while there were other Allman Brother family members in attendance this was made up of
"The band lineup boasted a mix of extended Brothers family members, from blood descendants to collaborators to proteges. Young guitarist Brandon “Taz” Niederauer led the charge on guitar, with his solo bandmates (Matt Fox, Kendall Lentz, and Mat Godfrey) filling out bass, drum, and guitar roles alongside Shady Recruits drummer Jack Ryan, vocalist/harmonica player Gabriel Kelley, singer Lamar Williams Jr., guitarist Duane Betts, and more."

This was my first sight of the young guitarist Taz. An amazing talent and only 18, most of the people here knew him as he has been at The Peach for a few years. They did a killer Statesboro blues and In Memory of Elizabeth Reed but left no time for Whipping Post.

Taz and the boys


We then saw parts of both Magnolia Boulevard and Keller Williams. It was Ghost Light that caught my attention in the late afternoon.
Ghost Light


Blackberry Smoke was an act I was looking forward to. A Southern Rock band who have been around since 2000.

Moe is another band that I've not really understood the love? I liked their set but I always feel this is a band that just never goes anywhere.


Caught pieces of JRad (dead cover band), The Nth Power (Taz played with them) and The Shady Recruits.
Before settling down for the final act Umphrey's McGee. UM are a great diverse band that will cover anyone and cover alot of ground. They played what I consider their hard edge prog set. Kanika Moore joined the band for a stunning Dazed in Confused.

Thanks for the report and all the videos. Looks like a good time.
Gone to hell
Back by eight.
Top

Six String wrote:Thanks for the report and all the videos. Looks like a good time.

Brandon Taz Niedeauer - Taz was a guest for several sets at the festival and also was walking around has his own band and at age 18 he has already played with an endlist list of musicians. They played a 90 minute killer set of rock, blues, and funk. There is an Allmans feeling to them but there is more. My friend who has seen him said he sounds like a man now.

. he pulled off a nice The Star-Spangled Banner.


Andy Frasco & The UN - Wish I had researched more of the side stage bands. After a few songs from Tauk (good jam band they actually did a great cover of Fire) Andy had an insanely high-energy and completely unpredictable performances. Andy is a character and loved by all as he had a bunch of guests thru out the set. Frasco plays keyboards while singing but also jumps around slamming his keyboard bring people from all over to see what was going on. He then jumped into the crowd and surfed his way across the crowd to the near by wave pool. Then came a crazy cover of Rage's Killing in the Name.

Sadly only caught the last two minutes of Celisse who played the tiny grove stage. Trey showed up for a few songs including closing the set with LZ's Rock and Roll. Celisse is a blues singer guitar player.


Otiel Burbridge & Friends - Otiel who has played bass in the Allman Brothers and Dead and Company along with others. Opened with a Weather reprot jam before covering Dead and Allman songs. Devon Allman and Duane Betts joined for a few songs including Midnight Rider and Blue Sky. Devon and Duane both sound like their fathers. They brought on Berry Duane Oakley for Revival. 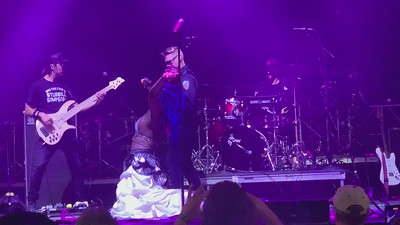 Doom Flamingo - The mermaid dance by steve, on Flickr[/url]

Allman Betts Band - Great to see the sons playing together - Devon Allman, Duane Betts and Berry Oakley. They have two albums and play a bunch of Allman Brother covers. Didn't catch the whole set but loved what I coaught

The final two bands was why I went to the Peach Festival and neither set let me down. For the first time all festival we had a hard time getting down close.

Oysterhead - super trio of Trey Anastasio, Stewart Copeland and Les Claypool. They opened with their signature Mr Oysterhead and Trey on his Matterhorn” guitar.

The trio jams all set long but also have a funky disjoined sound that somehow works for them.

To close the Peach Stage Saturday Night - Turkuaz took the stage with Jerry Harrison and Adrian Belew for the long-awaited debut of their Remain In Light Talking Heads tribute. I settled into my fourth row center seat, the deal at the Peach is reserved seats first 30 rows but only for the two main acts each night, Turkuaz was the after night act so reserve was off. The funk dance band mixed perfect with Talking heads song. First up was Psycho Killer that had the crowd in a frenzy.

They then blazed into Crosseyed and Painless, Houses in Motion, Electricity (Drugs) and an amzing I Zimbra.


They then did their new song Ophidiophobia recorded with Belew and Harrision. After a few more Remain in Light songs then did a great Cities and a cover of Jerry Harrison's Rev it up. Then they floored me with King Crimson's Thela Hun Ginjeet. As I looked around the whole crowd was dancing and I thought if Fripp could see this he would be pissing in his pants,

Comparing it to the praised Byrne tour in Broadway this combo IMHO was better. I loved the Byrne tour but it was too tight while Turkuaz was free and wild.
Top 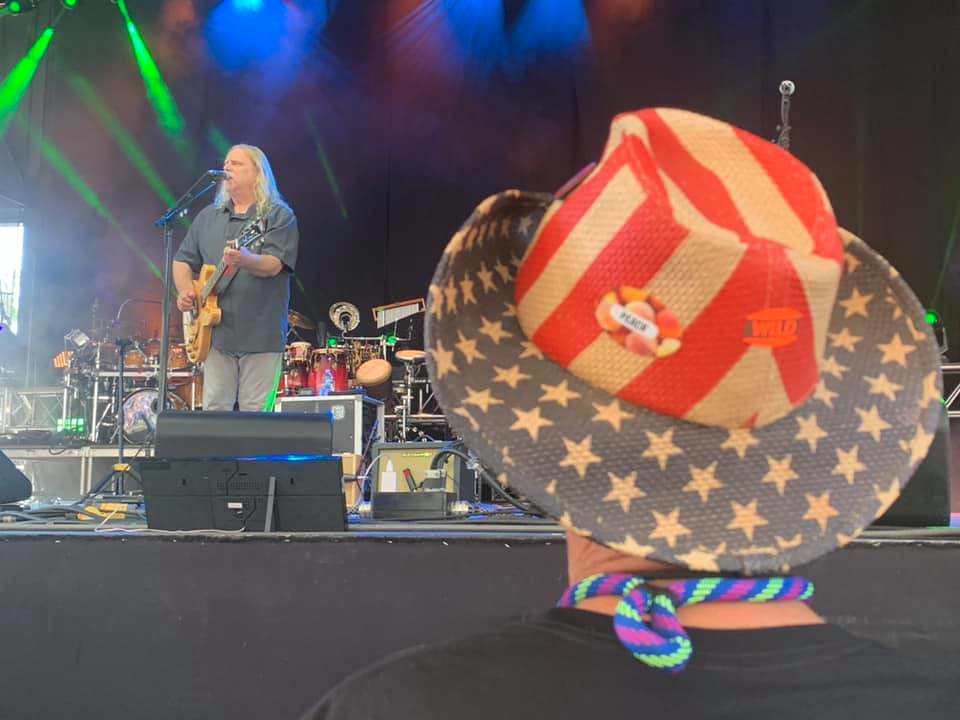 Jam bands aren't really my thing but interesting write up and Turkuaz sounding pretty great. Glad that they are keeping the Remain in Light music alive , its really stunning material and sounds like they are really doing a great show with it.
Top

Mike Boom wrote:Jam bands aren't really my thing but interesting write up and Turkuaz sounding pretty great. Glad that they are keeping the Remain in Light music alive , its really stunning material and sounds like they are really doing a great show with it.

thanks it was my highlight. I'm hoping they ad dates or I might have to go to NOLA in October.
Top

Followed by a nice short set by Blind Boys of Alabama, they covered Spirit in the Sky which I thought was cool.

Nick Perri did a nice My My Hey Hey (out of the Blue) and dressed the part.

Next up was Warren Haynes who I've not seen in years although saw him and Govt Mule several times back in the 90s. Solo Warren was nice as he did a few covers ( One, Working Class Hero and Hallelujah) for the end he brought on Blind Boys of Alabama for Soulshine.

The night ended with String Cheese Incident. Another band I've liked but never saw live. SCI really cover alot of genre but are always just lumped in with the jam bands. They opened with their sort of reggae, bluegrass song. They brought on Warren Haynes for a 4th of July US Blues.