Otis Spann and the Candid label

Otis Spann and the Candid label

If you collect jazz and blues, you may be familiar with the Candid label, which existed just briefly in the United States in the early 60s. I don't know who the label boss was, but Nat Hentoff produced the thirty or so jazz and blues records put out by Candid in their time, and they quickly became collector's items. I have just played one of the CD reissues from 1989, "Otis Spann Is the Blues", the recording of which took place at Fine Studios in New York City, on 23rd August 1960. It's the first album ever released by Candid and also the first solo album by Otis Spann, so you might say it's a tad historic. The album has a very spare sound, just Otis Spann on piano and Robert Lockwood Jr. on guitar. Not that I mind spare music, I've got plenty of Delta blues with just the guitar, but the combination of tinkly piano and unexciting guitar leaves me begging for more instruments and a fuller sound. It's just way too tinkly, and when the boogie woogie sets in, I just get annoyed. I've got a few other prized Candid CD's, but this boogie woogie thing I really don't need. 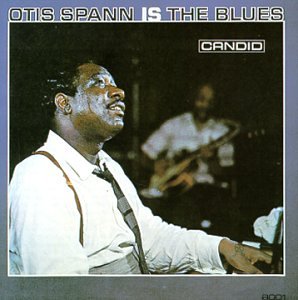 Muskrat
World's Foremost Authority
Posts: 21314
Joined: 17 Jul 2003, 01:05
Location: Next to the park; across the street from the college; and the freeway at my back
Contact:
Contact Muskrat
Website

Re: Otis Spann and the Candid label

Candid was a subsidiary of Archie Bleyer's Cadence label (Andy Williams, Everly Bros., Chordettes, etc.). Hentoff evidently pretty much ran everything on the artistic side.
Things that a fella can't forget...

Re: Otis Spann and the Candid label

Oh, I did not know that.
"When the desert comes, people will be sad; just as Cannery Row was sad when all the pilchards were caught and canned and eaten." - John Steinbeck
Top
Post Reply
3 posts • Page 1 of 1