I love a good juke box - When I was younger and touring junk stores you would often see some glory from a bygone age tucked away somewhere. When I was very young you would still find singles players in pubs and the records would change every couple of months.
Anyone own one?
These days they are obviously not the most efficient way to play a variety of tracks, and I suppose not the most practical piece of furniture. But fantastic nonetheless.
Put your juke box memories here.
Top

I have a 1963 Seeburg, when its working its great. Like most older machinery and electronics it needs fairly regular attention, but we wouldn't be without it.I have a loft full of singles and its great just to rotate them through, I usually pick a genre and stick with it for a month or so. At present its full of disco, as Mrs JKB likes a shimmy around the dining room.
Top

A friend of mine from some time ago had one - exquisite piece of machinery, looked beautiful and he filled it with 50s' and early 60s' rock 'n' roll singles which was very much his thing.

I'd love to fine one in good nick ... through the years I've bought a lot of second hand singles with an "ideal juke box" in mind
Thumpety-thump beats plinkety-plonk every time. - Rayge
Top

but sold it when we needed a new kitchen

I now have an NSM City II 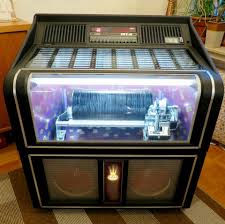 Bought in a Jack & The Beanstalk type way, when I went out supposedly to buy carpet but returned with this instead. Magic Beans!

A bit brutalist in looks but plays really well, handling 'dinked' and 'undinked' singles.
Fortunately there's a bloke who maintains and repairs jukeboxes not too far away so it is well looked after.
(I helped The Smiths Mike Joyce out a few months back as he has the same jukebox and was looking for someone who could fix something for him...which was nice!)

Like Jumper K, I've a loft full of singles that get a good rotation on the box, some selections never change but it holds 80 singles so there's always opportunities to change what's on. I just stuck some early Dr. Feelgood on there yesterday (She Does It Right, Roxette)

At Christmas the whole thing gets stocked up with all kinds of Christmas tunes (still hunting for a copy of 'Thanks For Christmas - Three Wise Men (XTC) but the thrill of the hunt in charity shops and second hand record shops is part of the fun, always have a list of wants on the go.

It's been taken out to mates houses for birthdays and wedding parties, like a huge semi-mobile disco!

Still have an eye on a really nice Seeburg but will see.
Give a shit or be a shit.
Top

A drinking buddy needed money and I bought his 71 Wurlitzer. This was back in 2012. I paid $3000.00 for it. It included abt 380 playable singles from the 60s. Lots of Beach Boys stuff. I don’t know if I paid too much or too little and I’ve never really enjoyed having it. In 2015 I sold it to a guy I knew who was running a Denny’s franchise on Louetta in Houston. He made it look like a 60s diner and the jukebox was a perfect fit. He was on a shoestring and paid me $25 a month for 3 years. Then he disappeared. The restaurant is still open and the jukebox is still there, but it’s different owner and he knows nothing about the sale, or so he said. Up to 2 years ago I used to go there with my daughter for breakfast on Saturdays. Always put in a quarter and played Little Deuce Coupe. Then she turned vegan and I haven’t been to Denny’s ever since.
There's a big difference between kneeling down and bending over
Top

A mate of mine in London has one. He doesn't have that many singles and only changes them about every ten years but as I don't get to visit him that often it's not an issue for me.
Bugger off.
Top

Rorschach wrote:A mate of mine in London has one. He doesn't have that many singles and only changes them about every ten years but as I don't get to visit him that often it's not an issue for me.