Bananarama - "Bunch of Hits" - (Spectrum, 1993) -- Budget CD of Bananarama's hits, B-sides, and album cuts. All from 1982 - 1991. Some of it sounds very harsh and clinical, like SAW, but it was actually Jolly and Swain who produced. Stock Aitken Waterman (SAW) did do some extra production, notably the cover of the Shocking Blue classic, "Venus". Bananarama is a daft name, I never really got used to it. But they had a few undeniable gems like "Robert De Niro's Waiting", which charted at #3 UK. When they were good, they were really good, a perfect antidote to the drab post punk that was taking all the fun out of music. 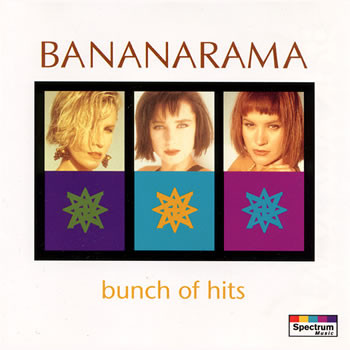 So Robert De Niro's still waiting, eh?
"When the desert comes, people will be sad; just as Cannery Row was sad when all the pilchards were caught and canned and eaten." - John Steinbeck
Top

They had a couple of good songs - I think there were two with the Fun boy three, the Robert De Niro's Waiting and Love in the first degree are good. Their cover of Venus is rubbish. I do it better than them.
Top

A very poor act indeed, as you might expect from the GoogaMooga vault of 50c tat.

Matt 'interesting' Wilson wrote:So I went from looking at the "I'm a Man" riff, to showing how the rave up was popular for awhile.

They were a bit of fun, couple of catchy songs and I guess that was enough.

Still like "Cruel Summer," haven't heard that DeNiro song since the eighties.
Johnny Coan, describing the members of Preludin with no irony whatsofuckingever:
"Dopey lethargic cunts sitting around the table waiting to be fed."
Top

Cruel Summer really caught the feeling of the summer it came out.
Deep Sea Skiving is a great debut, there’s nowt wrong with a group having a bit of fun.

The girl group with the greatest number of chart hits fact fans.
Give a shit or be a shit.
Top
Post Reply
9 posts • Page 1 of 1