I've never been much of an autograph seeker, but since the early '90s I've made a hobby of collecting signatures for anyone whose name appears on the Pete Frame Family Tree in the Soft Machine Triple Echo anthology. Besides being a cool piece of memorabilia, it's fun to watch their reactions - at first they're puzzled because no one's ever presented it to them, then they look around and marvel at all the names preceding theirs. Besides points for originality, they genuinely enjoy adding theirs to the pile, as if adding handprints to Grauman's Chinese Theatre! 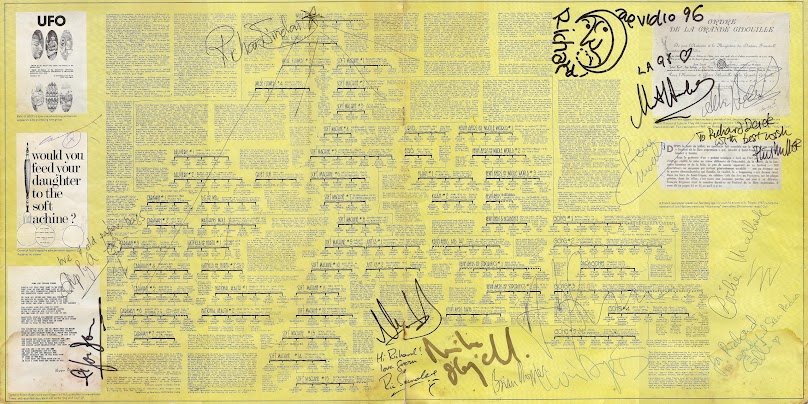 Some signatures are more legible than others, so here's a list, clockwise from upper left:

So 17 in all so far. I think I've reached the point where I'm going to obtain all the signatures from people who will ever be visiting the US, so a couple weeks ago I wrote to Judy Dyble at her website to ask if she'd ever tour the US, or at least play a few major cities with Richard Thompson. She said it wouldn't be feasible, but she would happily sign it were I to mail it to her. After thinking about the risk of the postal system losing it, I figured, hey, it's just a thing - cool if it's around, no major tragedy if it isn't. Besides, hashtag YOLO, Sydney Or The Bush, and all that. Now that it's been scanned, I think a virtual image is as good as the original if worse comes to worst. After Judy signs it, she'll forward it to Richard Sinclair's wife Heather, who will be in London for a few months and is already tracking down a few people who are interested. I think something like this can take on a life of its own - the more signatures it gets, the more people would be interested in taking part. What I wouldn't give to have Mike Ratledge and Robert Wyatt add to it... not to mention Bill Bruford and Phil Manzanera. (A bit late for David Bedford and Lol Coxhill, sad to say.) So it's off in transit now. Looking forward to seeing how far it gets!
Last edited by zoomboogity on 15 Apr 2016, 23:22, edited 3 times in total.

That would be excellent! Let him know, give him my e-mail, and I'll get him in touch with Heather. She may know him, or of him, already, but just in case.

I once heard - don't know if it's true or not - but Bruford used to live in Palos Verdes, about a 15-minute drive from me. I could have handed it to him! There again, I'm sure he wouldn't have appreciated someone knocking on his door for an autograph. It would have brought bad juju to the whole enterprise.

The last sig I got was Allan Holdsworth. He was playing locally, so I stopped by in the afternoon and spoke with his manager about it (whom I'd met before), showing it to him. He said, "Allan already signed it." "No, he didn't." "Yes, right there." "That's Andy Summers." "No, it's Allan." "Ummmm, no, it's Andy." After a bit of back-and-forth, I had to laugh. "Look, it's my thing, I know who I handed it to. If Allan had signed it, I wouldn't be here to get a second one." He finally relented and told me where Allan was, outside at his car. I showed it to Allan, he saw Andy's sig, and said, "I already signed it, right there."

As you can see, they do look similar!

The three that got away:

- Tim Blake stayed at my house when he played in LA in 1992. It didn't occur to me that have him sign it until he'd left. D'OH!

- at the big three-day Canterbury festival in Seattle back in 2002, I tried to find John Marshall, but he'd got driven to the airport for his flight home immediately after he played.

- this one still gets me. About ten years ago, I used to take my dog to Laguna Beach frequently, and I'd pick up the OC Weekly to see if any gigs were coming up. John Goodsall was in LA at the time, playing mostly nowhere gigs in craphole venues, blues jams and the like. A bar in Laguna called The White House - basically a yuppie meat market with a small stage for DJs or reggae bands - listed that Goodsall would do one of his "all-star" jams, semi-cryptically mentioning "including a certain guitarist from a very blonde, very famous band from the '80s" - IOW, Andy Summers would be there. Three bucks to get in. (This is before I finally did get his sig.) Halfway there, I realized I forgot the booklet, but didn't feel like turning around for it. Andy was a no-show, so no big loss...

...until the second set. There were maybe a dozen people in the audience on a weeknight, the yuppies staying away in droves. Goodsall takes the stage with his drummer. He announces that the second set will include a friend of his who'd been there the whole time. He brings Percy Jones to the stage! So not only did I blow on it on that, but the bass was so undermixed that he was inaudible. Probably heard himself just fine next to the amp, but I could SEE what he was doing yet couldn't hear it. Too much frustration for what was supposed to be a fun night out. Time to go home.

When Andy did eventually sign it, he saw Kevin's sig and said that he hadn't been in touch with Kevin for about 20 years. I told him that I was setting up a concert for Kevin in a few months - the Knitting Factory concert with Gong that you saw - and he looked up with genuine interest. (Guess it beats getting asked another question about Sting.) He introduced me to his assistant and said to keep in touch. Andy did show up to the concert, bringing Jack Bruce with him. In those pre-Instagram, pre-take-a-photo-of-everything days, the moment just happened and went unnoticed by others. That would have been a cool moment to capture, I must admit.
Top

This is the most wonderful thing I've even read in this forum.
I run out of talent
Top

Sadly, four of your list are no longer with us

I'm no autograph hound, but, shit, that is totally great, Richard.
You'd pay big bucks to know what you really think.
Top

Carlsson wrote:Sadly, four of your list are no longer with us

No telling who will be next - for all I know, it'll be me!
Top

Carlsson wrote:Sadly, four of your list are no longer with us

No telling who will be next - for all I know, it'll be me!

Hopefully not!
I run out of talent
Top

One of the most fun incidents involved Ric Sanders, when Fairport played at a college in Pasadena. I arrived in the afternoon, found the auditorium, and listened to the sound check from outside. As soon as it was done, I went inside, and someone asked me what I wanted. I showed him the booklet and asked if Ric would sign it. He was backstage having dinner, so the guy went to check. A minute later, Ric motioned to me from across the room, as in, "Come over here." As I got nearer, he did it again and asked me to follow him to the back. They had more food than they could eat, so he asked me to join them and offered me a plate. We ended up chatting for about 20 minutes, and almost none of it was about music - once we found out we shared a love of 1930s Hollywood screwball comedies, there was no turning back! Aside from the signatures, it's those little moments that make you glad to be you (however fleeting that feeling may be!).
Last edited by zoomboogity on 27 Apr 2016, 02:18, edited 2 times in total.
Top

Fantastic. Good luck with your task.

I saw Soft Heap in a council hall in Glasgow years ago. The caretaker wasn't chuffed when setting up his kit, Pip brought out a hammer and nails and set about hammering nails into the stage to anchor his kit. When playing he looked as if he was doing hard sums in his head at the same time.

This is a wonderful thing.

Does anyone know whatever became of early guitarist Larry Nolan?

His last name is actually Nowlin. I did a google search to see if he was back in California, and I found an obituary page of a Larry Nowlin who was born in 1943 and died in 2010. There are a few other people with the same name in CA, but sometimes it's "know when to hold 'em, know when to fold 'em." I'd heard once that Mick Fincher (Shooting At The Moon) moved to the US East Coast, but when someone does such a complete disappearing act, I feel leery about hunting them down, even for this. With Heather contacting people for me, it's better that they have a longtime friend approach them than if I go snooping around, especially if they've dropped out of the public eye. Someone like Judy is different in that she has a website and invites contact from fans. The more, the merrier, but no need to be greedy about it.

Jeemo wrote:I saw Soft Heap in a council hall in Glasgow years ago. The caretaker wasn't chuffed when setting up his kit, Pip brought out a hammer and nails and set about hammering nails into the stage to anchor his kit. When playing he looked as if he was doing hard sums in his head at the same time.

When Hatfield played Bajaprog in Mexicali in 2006, Pip did the show with a broken foot, wearing a cast and walking with a cane. Afterwards I asked him how he managed. He just chuckled and shrugged and said, "After the first ten minutes, I didn't even care anymore!" The after-concert party at the organizer's home was a blast. Pip was hilarious - I don't even remember what he was saying (it was one of "those" nights), he was just riffing on whatever popped into his head until my sides were hurting from laughing so much. What a character he was.
Top

Judy signed it and passed it on. Next stop: Dave Stewart. (I'll have sigs from all four Hatfields - yay me!)
Top

I'm pals with a good friend and neighbour of Wyatt's....

It is very cool, by the way
The Complete Slade Mp3 set now available in the usual place, should you want one.

The Slider wrote:I'm pals with a good friend and neighbour of Wyatt's....

It is very cool, by the way