The word genius gets thrown around a great deal in the vicinity of Brian Wilson, but the friend who inspired and to some extent mentored him, showing him the way around the studio, who wrote great lyrics as well as sweet tunes, and was an actual straght-A student, drag racer and golden-haired surfer-dude Californian, with two ears and a sense of humour, Jan Berry, is routinely dismissed as part of a novelty act.
My contention is that Jan & Dean (and apologies for not really going on too much about Dean Torrance, who is a decent, talented bloke with a pure falsetto who has also designed some great album covers, but was very much the second banana tag-along in this act) made a run of singles that match those of the Beach Boys, a run of albums that are just as rubbishy and throwaway as those of the Beach Boys, and was planning his Pet Sounds (although hopefully less po-faced), Carnival of Sound when, in April 1966, he totalled his Corvette not far from Dead Man’s Curve and drove his golden scalp down into that great brain. He was in a coma for a couple of months, and never fully recovered.
Although the duo did have a career after that, it’s basically fans-only stuff. I love it, just as I do the material from Jan’s teenage years, daft pop songs and nursery doo-wop with interesting studio effects (that whole late 1950s early 1960s scene of white kids in California experimenting with studios - The Hollywood Argyles, Fowley, Skip & Flip, Sandy Nelson, etc – really fascinates, especially as it was at the time I began listening), but it’s a run of singles I want to concentrate on, beginning with their first number one, the Brian Wilson-Jan Berry song, Surf City, which demonstrates just how much better a lyricist of the contemporary scene he was than Mike Love. I mean, did the Unlovely one ever come up with a verse to match ‘If my woody breaks down on me /somewhere on the surf route, / I’ll strap my board to my back / and hitch a ride in my wetsuit’? And of course, as always on their singles, it’s the Wrecking Crew on instruments and Bones Howe engineering, a marriage made in spun sugar heaven.

So, those singles (British issues only):
1963
Surf City / She’s My Summer Girl
A classic you should all know on the A-side, with a bit of sunshine pop on the other side, with Leon Russell on piano and a double-time handclap section in the coda
Honolulu Lulu / Someday
The a-side was, as the custom of the time dictated, a rewrite of the number one, with some more outrageous rhymes (it really helped that Jan was a surfer and understood the lingo) and falsetto harmonies and a fine Hawaiian guitar solo (Glen Campbell, I think, but don’t quote me). And on the B-side, a rather leaden pastiche of the Four Seasons from an earlier recording.
And then they switched from surfing to something even closer to Jan’s heart, fast cars.
Drag City / Schlock Rod Pt. 1
The A-side is another rewrite of Surf City, this time with engine sounds, but the B-side is something else again, owing a debt to Alley Oop and possibly Spike Jones. A comedy song with sound effects, silly voices and a wondrous guitar intro. Part 2 turned up eventually on an album. Worth listening to if you’re not too stuck up about musicality. Here is the full magnificence


1964
Dead Man’s Curve / the New Girl in School
DMC was their second number one. Its geographically accurate (an Angeleno I met on the imdb music board confirmed it) account of a road race to a ramshackle, kitchen-sink-and-all Wrecking Crew track, remains one of the great death records, and makes better use of a harp than Joanna Newsom or Harpo Marx in their entire careers. ‘Well, the last thing I remember, doc…

On the B-side a delightful piece of high school whimsy, with papa do ron de ron days and falsetto wailing all over another Brian Wilson tune.

Little Old Lady From Pasadena / My Mighty G.T.O.
Another comedy record about a road-racing granny, but unlike most comedy records, a big hit, largely because of its charging, full-on sound; the last big hit the duo had. The B-side is a bit rubbish, actually, another car song that sounds like a Beach Boys reject and that Jan had no hand in writing
Ride the Wild Surf / The Anaheim Azusa and Cucamonga Sewing Circle, Book Review and Timing Association
An odd choice of a-side, really, yet another rewrite of Surf City, without the engaging added hooks the first two rewrites had had. The b-side, though, with its brilliant tongue-twisting lyrics featuring old ladies doing doughnuts in sports cars across suburban lawns - 'They wear organdie dresses / and high-button shoes, / they read Playboy magazine / and Hot Rod News' - that are the equal of Schlock Rod in their weirdness, but this time set to a rocking Wrecking Crew backing

The single tanked a bit, so they hitched a ride on what they hoped would be another bandwagon, skateboards.
Sidewalk Surfing / When It’s Over
And to be truthful, it’s a bit rubbish, with the song yet another Surf City clone, but the B-side saves the single, an album track written by Jan’s GF, Jill Gibson, a plaintive ballad – two words rarely used about the band’s back catalogue – with an interesting Pet Sounds orchestral arrangement (recorded in 1964) featuring an oboe. Oh go on, treat yourselves

1965
From All Over the World / Freeway Flyer
The a-side is the theme from the TAMI show, which the duo hosted. It’s a list song, featuring a Beach Boys impersonation, The Rolling Stones from Liverpool – take that, those squabbling over Dartford and Cheltenham – and a massive dollop of cheese. The b-side is about cop cars - this big black and white jobs that really move out; ‘Freeway flyer, gotta make his quota today’, sirens in the track; ‘Big John Law doesn’t take no lip / Unless you’re a chick and really hip.’
And at this point, J & D dropped the scenes and started making pure pop records again
You Really Know How to Hurt a Guy / It’s as easy as 1,2,3
The a-side is basically Jan solo, on a song whose arrangement takes note of contemporary stuff by Jack Nitzsche (especially for the Righteous Brothers). It needs to be played loud for best effect.

The song was co-written by Jill Gibson, and she sings with Jan on the b-side, an album track from the previous year which is a typical piece of early 1960s pop. I love it, but I don’t expect anyone else to.
I Found a Girl / It’s a Shame to Say Goodbye
The a-side is a happy-flappy love song that owes a debt to the British Invasion, and the b-side is a bit retro, and, I suspect, made a coupe of years before. Again, lush instrumentation lifts it

1966
A Beginning from an end / Norwegian Wood
This single is UK only, made up of sides from two singles that were cancelled in the USA. ABfaE is one of the scmalziest death records ever made. I mean, I love the genre, and I occasionally play this to people to gross them out, but I’d never listen to it alone for pleasure. And of course the B-side is a Beatles song. Except for those with VERY specialised tastes, the first really bad release in four years
Batman / Bucket T
The last release before Jan’s accident paired Jan’s song about the TV series (not the theme tune) with a rewrite of one of their early songs, Jenny Lee. Covered by the Who, of course.

Muskrat
World's Foremost Authority
Posts: 21224
Joined: 17 Jul 2003, 01:05
Location: Next to the park; across the street from the college; and the freeway at my back
Contact:
Contact Muskrat
Website


Things that a fella can't forget...

I already put up New Girl in School

I didn't realize "New Girl in School" was the B-side of "Dead Man's Curve" since my experience of listening to Jan & Dean was radio (our brief surf rock revival in the 70's) and best of compilations. I'll take it over the A side.
Where would rock 'n' roll be without feedback?
Top

Muskrat
World's Foremost Authority
Posts: 21224
Joined: 17 Jul 2003, 01:05
Location: Next to the park; across the street from the college; and the freeway at my back
Contact:
Contact Muskrat
Website

I know. I just included it to establish the evolution for people who are too, uh, busy to read the entire thread.
Things that a fella can't forget...

I don't know if they'd be considered a novelty act - I love Jan & Dean, and not in a Tiger Beat way.
Don't fake the funk on a nasty dunk!
Top

I'm not sure that Jan Berry ever mentored Brian, but I sure do love me some Jan & Dean. In the absence of their albums in mono on CD, this is what you need: 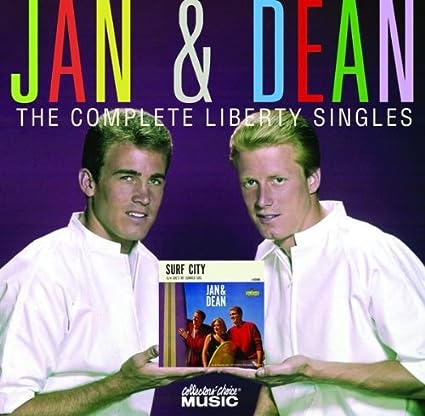 All the Liberty singles in their original mixes. Out of print, of course.

Every single that Rayge posted, and more, are on this two-disc set.
Top

I have that set, Matt, as well as the seven inches, and endorse your recommendation.
The stuff about Jan mentoring Brian – or at least showing him the way in the studio – came from the booklet included in that set. I don't know how true it was, I was just trying to get people's attention

Don't mind me - this is just a Note To Self to remind me to come back to this when I have more time...

bump - I thought I still had this one to do
In timeless moments we live forever
You can't play a tune on an absolute
Negative Capability...when a man is capable of being in uncertainties, Mysteries, doubts, without any irritable reaching after fact & reason”
Top

Since this thread, I've read Dean's book Surf City https://www.amazon.com/Surf-City-Jan-De ... n+and+dean , and it was very interesting. As much as Jan was into the music, he also never let his dream to be a doctor die - even at the height of their success he was attending school to eventually practice medicine. Both Jan & Dean came from wealth (especially Jan) and they would play football with Elvis and his entourage in a public park in Beverly Hills in full view of anyone who happened to be there.
Top
Post Reply
11 posts • Page 1 of 1