in reality, all of this has been a total load of old bollocks
Post Reply
10 posts • Page 1 of 1 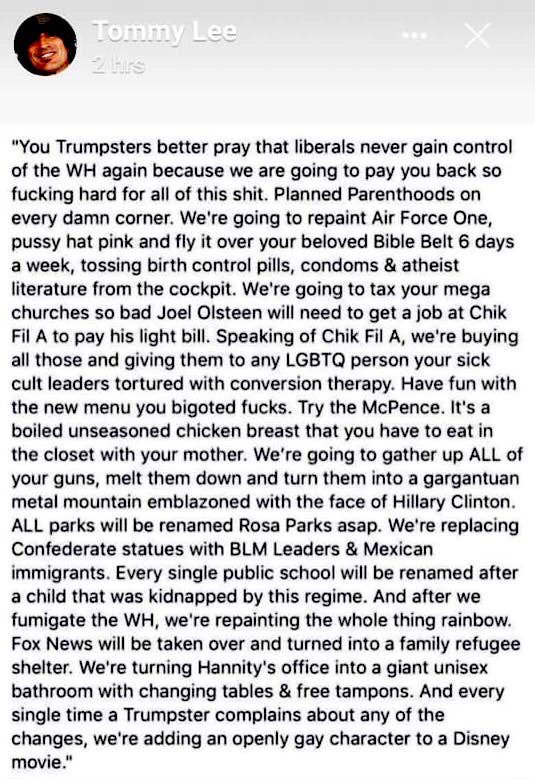 And I chop it down with the edge of my hand
Facts do not cease to exist because they are ignored.
This is where we walked,This is where we swam, Take a picture here,Take a souvenir
Top

"Fonz clearly has no fucks to give. I like the cut of his Cupicidal gib."
Top

I liked this one, (mis)attribued to Gloria Steinem:

I want any young men who buy a gun to be treated like young women who seek an abortion. Think about it: a mandatory 48-hours waiting period, written permission from a parent or a judge, a note from a doctor proving that he understands what he is about to do, time spent watching a video on individual and mass murders, traveling hundreds of miles at his own expense to the nearest gun shop, and walking through protestors holding photos of loved ones killed by guns, protestor who call him a murderer.

After all, it makes more sense to do this for young men seeking guns than for young women seeking an abortion. No young woman needing reproductive freedom has ever murdered a roomful of strangers.

That’s one thing about troubled times - the rants certainly improve.
"You know we have a world, right?" - President Donald J. TRUMP
Top

Are these really troubled times? I mean, are things worse than they used to be? The rich getting richer is an old story, an old game. Somehow or other these rich players make it possible for a sizable number of us plebes to get a piece of their pie, enough at least to pay rent and buy groceries. That lessens the troubles of these troubled times. All the shit we've been through, the Civil War, WW 1 & 2, the Holocaust, the great depression, and yet today any one of us can stop into a convenience store and buy us some Ben and Jerry's.
Civilization can never be taken for granted. Thierry Meyssan
Top

Please resubmit your comments in the form of a rant.
Thank you.
"You know we have a world, right?" - President Donald J. TRUMP
Top

And there's a tremendously worthy rant from well-known political commentator Peter Reid in the Independent today - but I can't post a link from here.
Top

There was always talk of division in our house.

Some of it was literal. Whether Everton or Liverpool would win the old “First Division”. Some of it was actual. Mum was an Evertonian and dad a Liverpudlian – a “mixed marriage” as my grandad would say.

I remember thinking “I hate you, mum” because her team had beaten mine in the FA Cup in 1967. This was when I used to stand alongside dad on the Kop. Before Everton signed me up and showed me the light.

Obviously, I didn’t really hate my mum. I just felt like she had got it wrong. I had a similar feeling recently. We were sat having a cup of tea and she said: “Pete, I voted Leave.” After I had picked my biscuit up off the floor, I said: “Mum, Leave is Boris Johnson. Leave is Rees-Mogg. Leave is Michael Gove and David Davis.” She nodded and said she had changed her mind.

In Liverpool you see a difference every time a team gets to a final and flags hang from windows; or when you get in a taxi and are asked, “You a red or a blue?”, or when you get your first kit and kick a battered “casey” (football in leather casing) around on the “georgies” (King George V playing fields) as I did in my day.

But whether you are a red or a blue you know what it means to come from Liverpool. You share the same working-class values and there is a sense that what brings us together is way bigger than our differences. It’s why there are moments when our city’s red and blue are so close it’s almost purple. Like after Hillsborough, when the Kop was covered in red and blue scarves, by red and blue shirts, with red and blue memories, shedding red and blue tears.

It’s how Remainers became unpatriotic Remoaners who hated Britain even though it is Brexiteers putting the union at risk. It’s how calling for more democracy through a second referendum was twisted to become undemocratic. How can giving people a say based on what we know now, based on a clear, defined understanding of Brexit, be undemocratic?

Or contrast Liverpool’s unity and sense of togetherness with the divisive words published by former editor of The Spectator and our new prime minister, Boris Johnson: “They see themselves whenever possible as victims and resent their victim status; yet at the same time they wallow in it. Part of this flawed psychological state is that they cannot accept that they might have made any contribution to their misfortunes, but seek rather to blame someone else for it, thereby deepening their sense of shared tribal grievance against the rest of society.”

It goes on to talk of the “deaths of more than 50” supporters and “the part played in the disaster by drunken fans at the back of the crowd who mindlessly tried to fight their way into the ground that Saturday afternoon. The police became a convenient scapegoat, and the Sun newspaper a whipping-boy for daring, albeit in a tasteless fashion, to hint at the wider causes of the incident.”​

I am not saying everyone from Liverpool is perfect. Esther McVey... enough said. Then there’s Len McCluskey, the general secretary of Unite, who is for his own reasons happy to see his workers lose their jobs, and not give people a say in their future. Come on, Len. Sort it out.

And what about his mate Jeremy Corbyn, leader of the party I have supported all my life until the recent European elections, when I could not support the two-faced fence-sitting any more. Come on, Jezza! Shake your head, la!

And of course, there’s me. I am not perfect either. I didn’t have a clue of the detail in 2016. I had never heard of a customs union, or just-in-time manufacturing and how Brexit will devastate our car industry. I never thought about the Irish border and what might happen to peace over there. Which makes me think others probably weren’t aware of the detail either.

This is why I do not hate the people who voted Leave in 2016 despite the efforts of populists. Many are working-class, many donate to food banks, many are carers in our communities. Many support Everton. They are not the enemy.

The enemy are the people who take advantage of differences and turn good people against each other for their own self-interest. Those who have turned “taking back control” into taking control by seeking to shut down parliament, by working together behind the scenes to sell off our NHS, by unveiling a prime minister barely anyone voted for.

We have to get back our democracy and demand a “people’s vote”. It’s the only way we can all genuinely say we know what we are doing. It’s the only true way to take back control. Let us be heard.

In timeless moments we live forever
You can't play a tune on an absolute
Negative Capability...when a man is capable of being in uncertainties, Mysteries, doubts, without any irritable reaching after fact & reason”
Top
Post Reply
10 posts • Page 1 of 1