in reality, all of this has been a total load of old bollocks
Post Reply
32 posts

not a fan of Corn Dogs

Matt Wilson wrote:Ketchup? You put mustard on a corn dog...

I can go either way. see how easy I am to get along with? pass it along.
I will vote in the primary for the first candidate I see eating a corn dog.
that's how strongly I feel about it.
"You know we have a world, right?" - President Donald J. TRUMP
Top

https://www.google.com/amp/s/www.thegaz ... ent=safari
“Remember I have said good things about benevolent despots before.” - Jimbo

uh-oh.
"You know we have a world, right?" - President Donald J. TRUMP
Top

Civilization can never be taken for granted. Thierry Meyssan
Top

Gave me the worst case of indigestion I'd had in years.
I never believed in gluten intolerance until one of those fuckers blew me up like a fucking barrage balloon

They are almost completely indigestible
I'm Jay Z on a bad day, Shakespeare on my worst days

I had to look it up. So basically it's a battered sausage on a stick, except maize rather than wheat flour is used? That's what all the fuss is about?
Back in the pre-veggie days, I enjoyed battered sausages (not hot dogs/franks, a horrid perversion of the noble wurst with an uniquely vile taste) on an every now and then basis.
But, like a real man, I ate the fuckers with my greasy fingers, rather than perched on a stick like they were lollies. A dog with a stick up its arse. How fucking infantile.
In timeless moments we live forever
You can't play a tune on an absolute
Negative Capability...when a man is capable of being in uncertainties, Mysteries, doubts, without any irritable reaching after fact & reason”
Top

Since you ask, it is a battered hot dog/frank.
Wonderful!

I always go for a foot long (with mustard) as an appetizer before foraging for more substantial fine dining opportunities at the Ex in Toronto. 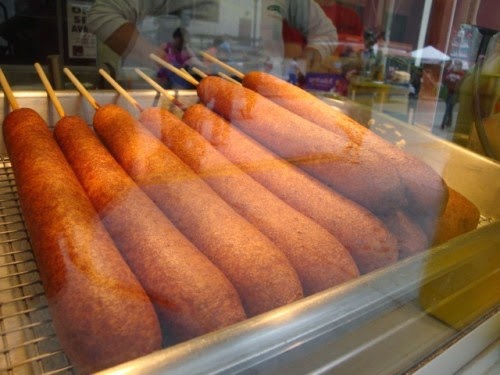 Mmmmmmm, so much good food energy!

Lord Rother wrote:Are there any Brits on here who enjoy them?

I really don’t get on with either.

Yeah, Brits, Grits, Tories, whatever, I have trouble with the whole stinking lot of them.

Corn dogs are called American dogs in Japan. I think they may have a higher horse meat quotient than their US counterparts.
Civilization can never be taken for granted. Thierry Meyssan
Top
Post Reply
32 posts