by the masked man
I recently caused a minor storm on the 'Your Latest Crush' thread by posting an image of American metal singer Maria Brink. Ms Brink possesses an extensive tattoo collection, and this caused considerable discussion, some of which was really quite nasty. Of course, part of this was probably bluster, but it made me think that this form of bodily decoration still provokes strong emotion both ways. It seemed to be suggested that tattoos are particularly unsuitable for women, which is perhaps brave talk considering I can name at least six current female BCBers with ink.

So what do you think? Do you have any, and where? For the record, I fall in the second category - I had a single lizard placed on my upper left arm sometime in the mid-90s. However, I recently have considered getting more work done...

by The Modernist
A small tattoo on the shoulder doesn't bother me, but I do find many tattoos on the body a turn off on women. It's up to them of course, but equally I don't have to like it.

by Magilla
They do not appeal to me, in general. I'm ok with one or two, but they tend to look gaudy if they're here, there and everywhere.

by Witchypoo
I have 6. All but one easily hidden if I want to. I love them and so does M. What other people think of them I really dont care. Altho I have had many comps on my back piece from some surprising people.

by kath
i don't have any. i've considered getting some, but since reap once asked me not to (early on), i won't. the man hasn't asked me for much, honestly. the only other thing he has ever asked me to do is quit smoking. i keep fucquin that up.

anyway, tatts on other people? only one answer: it just depends, as with anything involving personal style and expression, whether it's appealing or not. some people screw it up big time. they wear tatts like some folk wear too much makeup, or clothes that don't fit right, or the cheezy hairstyle of the month that everyone knows will vanish in a heartbeat... everyone cept the tattee, of course.

but other than the idjuts, it really does depend. there are some people who would look wrong with a single tatt corrupting their skin, others who wouldn't look right without an entire body covered in ink. most people are in between. moral of the story: the people with any style know what tatts, if any, suit. those are the people who are gonna look gooooood, no matter the choice.

by Molony
I'm not a fan.

by no one
i have none, but recently i've considered changing that... i've posted about this on Facebook... the more i see some truly creative designs, the more i feel inspired... but i've always been sort of anti-trend... anti-mainstream... if everybody's doing it, it makes me disinterested, for that reason, alone... up til now i've prided myself on being an ink virgin, part of what seems like a minority.... some of the people i work with who have a lot of them just look scribbled on to me... random images randomly placed... eventually, when the ink gets old enough, they look like muddy green/grey blobs....

what i admire are things like simple line drawings, or unusual designs such as notebook paper with child's handwriting on it.... things like that... a cartoon panel, like the Calvin & Hobbes scene i saw on some guy's arm... it contained the entire scene

i used to think about an ivy vine starting from the nape of my neck and extending across one shoulder, down and around my arm, and ending in one single leaf on the back of my hand.... i can't see myself actually doing it, though, so it's best saved for removeable body art, if i really need to have it done someday... i could totally go against everything i'm saying at some point, though, so i'm not 100% firm on this, as i have been until recently... i never thought i'd feel the way i've been...

for now, though, i remain unmarked and for the most part, not a very strong tattoo fan...

by Phil T
I do like tattoos, I have two myself (left upper arm) and am considering getting another special one done sometime in the near future.
That said, I don't like tattoos done to excess, mainly because I've seen so many of our patients, with way too many on their bodies. I personally think the secret is knowing when enough is enough and when to stop.

by Penk!
I don't have any and would probably never get any. I don't have any problem with other people having them, though, depending on the person, picture and placing. Overdoing it is never usually a good idea, but on very odd occasions I think it can look good.

by The Prof
You got to fell sorry for these blokes that get a massive tattooed head of a footballer on their backs along with the team name and the next day the player gets transferred to their rivals.

by Thesiger
I'm against them.

by Your Friendly Neighbourhood Postman

The Prof wrote:You got to fell sorry for these blokes that get a massive tattooed head of a footballer on their backs along with the team name and the next day the player gets transferred to their rivals.

And even worse: with your own aging, the tattoo ages too: the player's face sags, with terrible cheeks and chin, the nose will sink in a nasty way, and the lips will distance them from that nose in an ever more unflattering (comical?) way. And when you succeed in picking up a date at age 55, the lady will shriek and run away in horror after you undressed.

by The Driver
A small tattoo somewhere can be nice, but personally I don't go for extensive tattooing, regardless of the gender of the person sporting them. Plus, some of the inks contain mercury, don't they? that can't be a good thing...

by Your Friendly Neighbourhood Postman 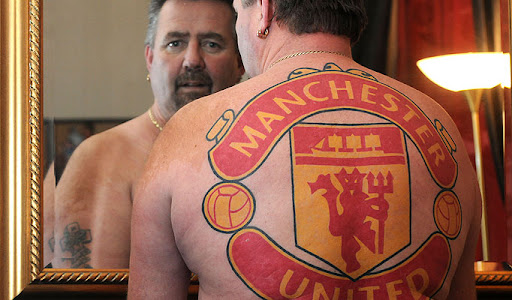 (Am I delusional, or does that Man U guy post here regularly?)

by Medb
I have a small, black, 1.5 inch square, celtic design on my upper arm and I love it.

I hope the anti comments about women having tattoos was just bluster, because I'm sure modern men are aware that it's none of their business what a woman does with her body. Why would it be any different for a woman than a man?

I'm not just being bolshie and feminist, I'm genuinely interested in the reasoning

by The Prof
Who's telling anyone what they can and can't do?

People are perfectly at liberty not to like something.

The Prof wrote:Who's telling anyone what they can and can't do?

People are perfectly at liberty not to like something.

I'm just interested why people might view tattooing in connection with women differently than with men in mind. I think it's a valid question.

by The Modernist
Exactly Prof.

I thought I went out of my way in my post to say I wasn't telling women what they can or can't do with their bodies. But the OP asked what we felt about them and all people have been doing is giving an honest reply to that.

I thought I went out of my way in my post to say I wasn't telling women what they can or can't do with their bodies. But the OP asked what we felt about them and all people have been doing is giving an honest reply to that.

Jeeeez, I wasn't suggesting YOU were anti, you did address that some posters differentiated between men and women tattooing though. I was just questioning why that might be the case, because it does hint at a bit of sexism.

Can we not all jump on me at once please?
All times are UTC+01:00
Page 1 of 8
Powered by phpBB® Forum Software © phpBB Limited
https://www.phpbb.com/