Return of the RECENT VIEWING

Given she was outstanding in Fargo I'm sure she's at the front of most people's mind.

Three Billboards is the first one of the nominees I want to see. Fargo is one of the great films of the '90s.
Top

It looks like a pretty decent batch of films for a change. Going on what I've seen and the reviews.

Well, I'm always happy when actors I like are nominated. This year it's Gary Oldman, Daniel Day Lewis, Francis McDormand, Denzel Washington and Sam Rockwell. So, I'll probably see all of their movies anyway.
Top 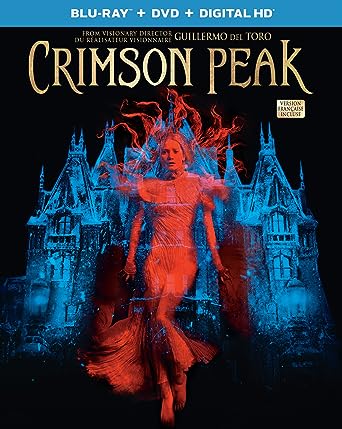 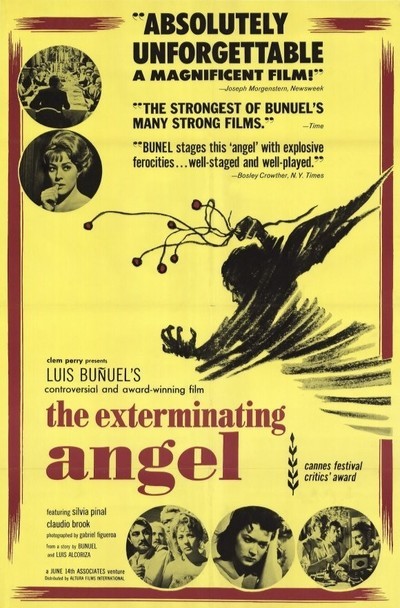 I really like what I’ve seen from Bunuel. There’s a lot of humour in this and trademark digs at the bourgeoisie and religion as the guests at some awful party, trapped for some inexplicable reason in one room succumb to their more base instincts. I loved the little moments of mischievous dark humour, like the dead hand flopping out of the cupboard and the more outré stuff like Thing from the Adams family making an appearance were delicious too. If you’re gonna do social satire then I think this is probably the best approach Great stuff. 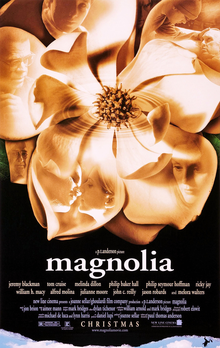 When this came out I think I felt it lost it after everybody starts singing and frogs started falling from the sky. This time I felt the change in tone was appropriate and its melodrama actually very moving. There’s some real stellar material here. The storyline with the dying man is the main attraction but there’s lots of great stuff alongside this that manages to pull off the movie trick of being slightly improbable but still managing to feel somehow real and human. The movie actually riffs on this idea as well so it’s *yawn* meta too. All these interconnected storylines (Cruise as the misogynist life coach, William H Macy as a former child genius (heartbreaking and brilliant), John C Reilly as a lovestruck cop, Julianne Moore as a gold digging wife) push the boundaries of believability but the movies themes of regret, guilt and the consequences of parental abuse still manage to be genuinely affecting and there’s real humanity here. And Phillip Seymour Hoffman is great. Obviously. Those who like their films to feel more natural and authentic might struggle with the movies dramatic shifts in tone and it’s more experimental moments but this is a great cinematic experience delivered with effortless brilliance at times. 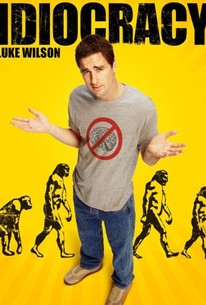 It’s essentially a 5 minute SNL sketch stretched out to movie length. It doesn’t go anywhere interesting, the humour is crude and unfunny and it’s not a patch on Judges far superior Office Space, let alone Beavis and Butthead do America.

A film adaptation of a good children's book I read forty or so years ago. It is an engaging survival story of a resourceful boy who decides to live for a year in the Canadian wilderness. The movie adaptation has its moments but features some very dated-seeming elements, including an odd, almost psychedelic sequence, and an unintentionally funny sequence in which the lead character is half-heartedly bullied by some kids in a malt shop listening to Henry Mancini! I think this one could stand for a good remake.
Where would rock 'n' roll be without feedback?
Top

The usual excellent write ups by the Goat Boy.
Top 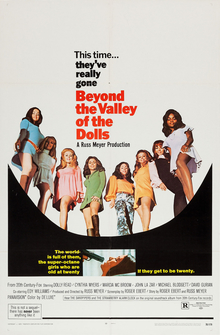 Beyond The Valley Of The Dolls


There’s a musical scene in Beyond The Valley Of The Dolls where the faces of pop Svengali Z Man and the magnificently cheekboned Harris Allsworth are superimposed over girl group The Carrie Nations that reminded me of the underrated Brady Bunch movie. Of course the Brady Bunch movie was a 90s spoof that paid knowing, campy homage to a 70s sitcom. Beyond The Valley is a spoof 60s film (released in 1970 but very much of the 60s) that satirises Hollywood and the counterculture with a proximity to that period which makes it a fascinating time capsule too. How intentional all of this was I honestly don’t know. Roger Ebert wrote the script, which is full of the most ridiculously over the top “60s” dialogue (“This is my happening and it freaks me out!”) and he’s said that it was very much intended as a delirious satire but the direction and handling of the absurd, escalating plot says more unintentional (but welcome) accident to me.

Crucially the actors play it almost completely straight as well which only adds to the madness as they seem trapped inside a creation they don’t fully understand themselves. The only actor who seems to really “get” what is going on is Z Man with his mock Shakespearean delivery and intentional campness that only manages to heighten the weirdness of the sincerity surrounding him.

It’s such an odd mix of styles and tones but it’s this unique mix that makes the film appealing: part Benny Hill, part satire, part Hollywood melodrama, part musical, part exploitation flick. Even the moralising, which would maybe come across as reactionary in others directors hands, doesn’t appear judgmental or finger wagging here. There’s an innocence and joy of film making that bypasses that sorta cynical gesture. It’s this combination of sincerity and satire that makes the movie so freaking weird.

I'll most certainly watch it again

Ah naw, don't say that. I have it recorded and was looking forward to it.

Drama Queenie wrote:You are a chauvinist of the quaintest kind. About as threatening as Jack Duckworth, you are a harmless relic of that cherished era when things were 'different'. Now get back to drawing a moustache on that page three model

Ah naw, don't say that. I have it recorded and was looking forward to it.

watch it, it's fantastic

It's neither shite, nor fantastic - but worth your time, Marcus.

I couldn't stand Beyond the Valley of the Dolls though. But I think when I reviewed it on this very thread a couple of years ago I was more forgiving.
Top

I watched It Happened One Night on AMC last night. Apparently, Gable and Colbert thought it was the stupidest movie they'd both ever done and just wanted to finish filming it. I had forgotten it was a Capra film.
Don't fake the funk on a nasty dunk!
Top 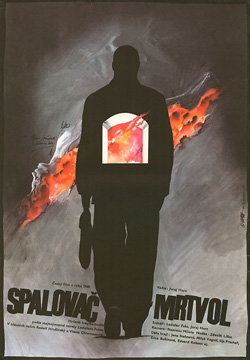 This is billed as a “comedy horror drama” on Wikipedia but I have to say I didn’t laugh but then maybe Czech humour is an acquired taste. The “humour” is very black anyway which is hardly surprising considering the films subject matter. I felt certain things were slightly over my head in relation to the films context. It took me a wee while to figure out for example that it was actually set prior to WW2 although I was aware that there was a German community living in the Sudetenland at the time (cheers Higher history!) who were favourable towards the Reich. Sometimes you get that when you are watching movies from countries you are largely ignorant about.

Karel Kopfrkingl is a cremator, devoted to his work and family and living a comfortable, middle class life in Prague. He’s an odd fella though who has an air of sociopathic calm about him and an interest in Tibetan Buddhism. In fact he believes in reincarnation and sees himself as some kind of noble figure liberating people from the drudgery and suffering of the mortal realm and thereby enabling samsara through cremation. An encounter with a Czech Nazi convinces him that he has German blood and that his wife and kids are part Jewish as Karel increasingly loses touch with reality and begins to hatch some kind of grand scheme to liberate thousands of suffering souls. Eventually and tragically the Nazis racial ideology combines with his Buddhist beliefs leading him to his own “final solution”.

There’s lots of odd angles and expressionistic touches throughout and it’s stylishly done with a very good performance from the main actor whose measured personality contrasts perfectly with the increasing madness on display. Apparently it’s highly rated in the Czech Republic and is something of a cult film and it’s easy to see why. It still felt fresh to me and alien too. Different, you know.

If this is what the Czech new wave was producing then I should really check out more.

Stylish fairytale, recalling the best of Jeunet & Caro and perhaps Tim Burton, set against the backdrop of the Cold War. The story relies on one of my least-favorite sci-fi cliches, i.e. evil military men plotting to use alien/mutant/lab created creatures for military benefit, but because it's part homage to 50's-era sci-fi it seems right anyway, and the story is more daring and surprising than most efforts derived from this formula.
Where would rock 'n' roll be without feedback?
Top

Allen's best '90s movie checks off all the boxes you'd expect from him at this point in his career. It's funny, but more profound, entertaining, yet thought-provoking. For me, it's up there with Crimes & Misdemeanors, Hannah & Her Sisters, Manhattan, and Annie Hall. Filmed while his life with Mia Farrow was unraveling. I don't think he's been this good since.

One of those gothic, Daphne de Maurier novels-turned-to-film (like Rebecca, just not as good) which take place in castles filled with rich Britons with much sturm and drag. All very respectable and a tad dull. Richard Burton's first US movie and another honorable performance by Oliva de Havilland who is still alive at 101. I'm something of a Burton fanboy and after this, there's only one more of his seven oscar-nominated performances which isn't on blu (Anne of a Thousand Days).
Top
Post Reply
7877 posts