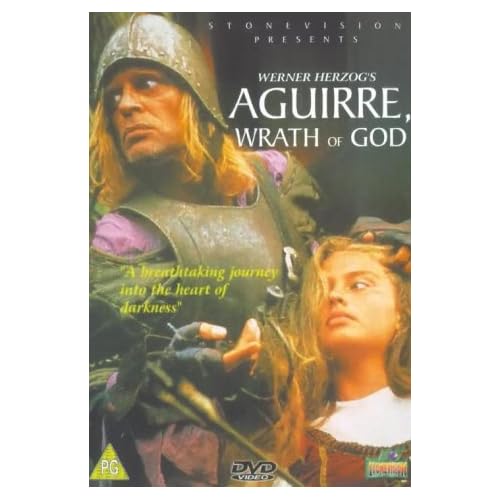 Werner Herzog was a leading light of the 70s "New German Cinema", which was determined to create a positive image for the country's post-war film culture. Herzog was, however, always the most wayward of the directors, looking way beyond narrow national barriers. And so, his breakout film, from 1972, turns out to be a fictionalised history of a 16th century Spanish adventurer, trying to create his own South Amerian empire.

"Aguirre" belongs to what we might describe the survivalist school of filmmaking. It was shot on a pittance, yet for heightened realism was shot in the inhospitable Peruvian jungle. Nothing was faked - Herzog employed native Peruvians both to act in the film, and also to act as guides, to help the film's crew survive in the jungle.

However, additional peril was added by the central casting of Klaus Kinski, a wild-eyed actor admired by Herzog. Kinski was known for reckless hard living, and his antics on set frequently threatened the lives of the cast. Suffice to say, Herzog had to confiscate a rifle Kinski had brought along at one point. Yet Herzog knew he was perfect for the role - Kinski's swagger and slow-burning rage were just right for this would-be conquistador descending into madness.

Initially, the film trades in a harsh realism - the jungle, as a force of nature, becomes almost a character in its own right. Although the hand-held camerawork often captures beautiful scenes, the audience is left in no doubt about the harshness of the conditions. Slowly, however, Herzog moves towards a more studied surrealism, using stylistised tableaux and focusing on increasingly strange imagery, ending up with Aguirre attempting to order about a ship full of monkeys.

It is particularly rewarding watching the film alongside the (English-language) commentary Herzog has supplied for the DVD release. This commentary, full of insights and anecdotes, almost persuades the viewer to see the film as a documentary about making a film in the jungle. See the early scenes where the entourage are struggling through the long grass, sometimes needing help to stay upright? That really was happening. Also, see the scene where Kinski as Aguirre bullies the other actors into seeing the world his way? That was happening off-camera too. The distinction between fiction and reality is getting increasingly blurred.

Later, Herzog and Kinski would have an even more demented and fractitious Amazon adventure ("Fitzcarraldo"). But "Aguirre" has a strangeness and originality all its own, and stands as one of Herzog's greatest films.
Top

I look forward to that commentary!
I know it's a bit of an endurance test but I think it's a pretty marvelous and singular movie. The madness of the star and the filmaker are as startling as the locations he puts them in.
Top

On my list of films to watch. Both the Herzog boxsets are a rather daunting prospect. Looks like an interesting film. Watched Fitzcarraldo a few years back and enjoyed that.
The picture you see is no portrait of me
Top

I don't think I've ever seen a film that has made a greater impact on me in terms of realising real cinema.
Top

Kinski is briliant when on form

I think it is a far far better piece of film-making than Fitcarraldo (which I actually enjoy more) and it is without doubt, as far as I am concerned, Kinski's most convincing performnce in a Herzog movie.
He shouts and blusters too much to convince as Fitzcarraldo (and I know that that is actually closer to his real personality but hs real personality is not very believable - he was too mad to be true) wheras as Aguirre he seems to simmer.

Have you seen My Best Fiend yet? It is an eye opener.

One of many outstanding soundtracks the mighty Popul Vuh did for Herr Herzog.
"U2 routinely spent a year in the studio...I have a theory: if you put four monkeys in the studio for a year with Lanois and Eno and Lillywhite, they would make a pretty good record, too."
Top

Oddly enough, I was going to post something just last night about whether or not this series was going to continue, but couldn't find any of the previous threads

Nice to see it's continuing.

I really didn't like Herzog until I saw this film. Now I find him endlessly fascinating (can't wait to plow through the new box set). This is one I need to see again, though, cos it's been a while since I last saw it.

pcqgod wrote:I like how Liebling progresses from a rotting, animated corpse living in his parents' basement to a slightly more life-affirming walking corpse by the end of the movie.

Sorry there's been a bit of a wait - I think the World Cup got in the way a bit. However, I enjoy doing this so I'll definitely be continuing the series. Coming up in future weeks:

I saw it recently and also watched the commentary. I can't say I really enjoyed it. That Kinski is a freak, though, isn't he? You have to keep looking at him for some reason.
Top

Not seen it yet on DVD; looking forward to the commentary.

Great film. I think JOhn's got it right: Fitzcarraldo is more "enjoyable" but Aguirre is the better film. The raft scene is unforgettable...

Pip pip!
Limestone Hills/Hot Topic
"She had a snake for a pet, and an amulet,
And she was breeding a dwarf, but it wasn't done yet."
Top

To be fair we rarely discuss serious films from the more arthouse/auteur end of things do we? I think there's definitely a place for that. Mind you it would be nice if Andrew could throw in the odd populist choice as well.

Anyway I now TRP and MM have got the classic films/ director thing going, I've decided to start my own thread as well. The Modernist's cult films will be coming soon.
Top

Well, there are two extremely mainstream American films in this new list - and yet still I get accused of obscurantism.

All five of these films have a place in film history. I can see no legitimate objections to any of the inclusions.
Top

I've been waiting for that one too so I can post my theory that Winston's underwritten role was one of cinema's finest reflections of the struggle for genuine racial integration in the US, made doubly difficult by the problems faced and caused by immigrants such as the gallery owner with the bad Greek accent.

doublepost.
Last edited by The Write Profile on 16 Oct 2006, 23:15, edited 1 time in total.
It's before my time but I've been told, he never came back from Karangahape Road.
Top

Magilla wrote:One of many outstanding soundtracks the mighty Popul Vuh did for Herr Herzog.

When I was watching this the other day that soundtrack really stood out. I'm curious as to whether their music has the same impact out of this context, because it really was quite something. There's something about the spaciness and engimatic tone of the music, it seems utterly otherworldly, particularly amidst all the frankly unhinged behaviour that occurs throughout the film. I think the other point is that Aguirre is very much a film that relies on its own force and momentum, its relentlessness only serves to highlight its absurdities.

The best of Herzog's cinema is so ambitous and wild as to be almost primal, really, you could imagine a lot of his pictures as silent films. Indeed, something like Aguirre, The Wrath of God may as well have intertitles between each scene, the dialogue serves mainly to emphasise the themes anyway.

More to the point, Kinski as an actor deals in enormously broad strokes, it's awesomely physical. You could tell why Herzog fought with him, but also the reason why he's absolutely vital to this film'' success and indeed the others, he's the very embodiment of the wrath. It's full of striking images-- the court scene where Aguirre's mutiners put their "prisoners" on trial is blackly comic, as is the closing shot which has our "hero" surrounded by monkeys, proclaiming himself the ruler of the land. Actually, it's strange that a film filled with so much harshness could be considered beautiful, but there is something awe-inspiring about the surroundings, the seemingly endless river and jungle.

Very much the defining Herzog/Kinksi film- and arguably the most epic, despite its length and relative simplicity.
Last edited by The Write Profile on 08 Jul 2007, 10:47, edited 1 time in total.
It's before my time but I've been told, he never came back from Karangahape Road.
Top

I'm waiting for 'Stroszek' to be delivered. I just reckon the context is easier to relate to - ex-pat Berliner in America. Perhaps a more digestible intro than all the shouting and fighting that at least seems to be a part of Aguirre.
Top

So I watched this the other night and I have to say I wasn't convinced. Some of it was pretty effective - the lush, dank atmosphere, Kinski's performance, the soundtrack - but the lack of characterisations weakened it rather; I found myself questioning the motives of those who followed Aguirre, wondering why they never mutinied again if so many of them were against him.
There is a brief scene in which a plotter is beheaded, which I suppose is meant to explain the lack of opposition to Aguirre. But this scene is very poorly done: I just can't believe that the mutineers would discuss their plan in such an audible whisper while in earshot of Aguirre. But to go back to my original point, none of the supporting cast are at all fleshed out, meaning that the occasional focus on an anonymous soldier during the river journeys carries no weight, as there's no way of knowing what he's thinking or feeling. Perhaps in a way this is Herzog's intention, to create a mood of uncertainty and to stress the charisma and intensity of Aguirre's character, but I don't think it works.
The subtitles are another flaw: my German is limited to say the least, but the subtitles were painfully literal and clumsy and at times it's like reading a picture book. This doesn't detract from the quality of the film, obviously - I don't know how complex the actual dialogue is by comparison - but it does detract from the experience.
It's still very well-made, though. Kinski's brooding, pensive performance, interrupted by the occasional squawking, flapping fit of anger, carries the film and the constant glances into the jungle either side of the river create a sense of real unease and unpredictability.
It's got me thinking that there might be something to the praise accorded Herzog, having only seen his tedious remake of Nosferatu before, but it's far from a masterpiece.