Okay, I wrote a bit on the Talking Heads a while back, I'll have to rewrite it a bit perhaps to fit the context of the thread, but hopefully it will make some sense, all the same:

It's interesting how some think that Remain in Light was when the Talking Heads blanded out. I don't think that's quite the case, although it's undeniably their last great record (live albums The Name of The Band is Talking Heads and Stop Making Sense aside), its more to do with the fact that they had taken the everyman misanthropy as far as it could go.

I mean, how much more paranoid could you get after Fear of Music, which denounces everything from Animals ("they're setting a bad example") to Air ("it can hurt you too). The impetutous rhythms that provided the momentum for that LP were developed in Remain in Light for different ends I feel, this time Byrne's protagonist is willing to accept that he has to involve himself with people.

Rather than declaiming that he "wouldn't live there if you paid him too" (as in "The Big Country" on second LP More Songs About Buldings And Food), he admits he might be missing something, though he's uncertain what the rammifications might be ("my god, what have I done?"). Musically, something like "Cities" could be placed on Remain in Light's second side, even if lyrically it's more jittery, prone to odd word associations ("think of London...a small city")

Okay, the above is all prime candidacy for Pseud's corner, I admit, but Stop Making Sense (the film) seems to be structured in a similar way- the begin with the edgy, detached numbers ("Psycho Killer," "Heaven") and end in a mass singalong. It's an incredible concert film, contrived of course, but also jubilant and full of life. It works as a piece of cinema aside from the music, and as such is one of Demme's best pictures. On another note, does anyone else think that Tina Weymoth looked gorgeous in that film?

They had a hell of a lot of great tunes, especially in their early material. If Remain in Light is their last great LP, then it's a hell of a summation of what they worked towards.

All the same, if I'm totally honest, the LP with the greatest impact has to be Talking Heads '77, one man's neurotic clarion call. Spindly, impatient and uncertain, Byrne pitches his character somewhere between Mr. Rogers, Norman Bates in "Psycho" and Patrick Bateman.

As for the songs, I think you'd be hardpressed to go past "The Big Country," the most relentlessly detached track ever to use pedal steel, perhaps? It's a strange song all the same, veering between placidity and outright contempt, and a great way to finish the transitional More Songs About Buildings and Food. Or is it the shifting, questioning "Mind" from Fear of Music? ("Everything seems to be up in the air this time")

To be honest, I reckon everything they did up to Remain in Light is essential, as are the two live albums. After that, you pays your money and takes your chances. Actually the live albums show what a great band they were, Tina Weymouth, in particular was an amazing bassist, just the sheer range to the material, always keeping it tight, even when the music stretched out. The Name of This Band is Talking Heads works better than any bestof could in outlining their appeal. The reissue is a dream,adding something like 19 extra tracks.

I might post a bit more, but I don't know whether would anyone would be very interested, so I'll just finish here.
Last edited by The Write Profile on 17 Jul 2006, 00:30, edited 2 times in total.
It's before my time but I've been told, he never came back from Karangahape Road.
Top

Talking Heads were one of my favourite bands, but they lost it big time on Speaking in Tongues, band democracy isnt always for the best. Although it had some good songs as an album it hurls chunks, and they never really got it back, although all the remaing albums have their high points.


Although both could change with any album from the first 4 and at least another 15 songs.

After being on holiday in Australia, I was playing Fear of Music and for some reason I was looking at the insert and found that the bird noises on Drugs were recorded at a Nature Reserve that I had been at in Brisbane a few weeks earlier.

I find Talking Heads virtually insufferable. Yet I've always loved their version of "Take Me To The River" - a ballsy cover for any band, especially Talking Heads.
Top

On another note, the Tom Tom Club's s/t debut is a lotta fun. Slight, perhaps, but it's more enjoyable than the 'Heads material in a throwaway sense, and more to the point it has a real love of music (particularly black pop music). Some of the tracks are virtual rollcalls of influences, really, and it's hard not to warm to the sweet "Genuis of Love," and the way it sneaks in the line "we went insane when we took cocaine" in such a way that it sounds like they were merely having icecream together and spilled some on their shirt.
It's before my time but I've been told, he never came back from Karangahape Road.
Top

The Right Scarfie Profile wrote:I might post a bit more, but I don't know whether would anyone would be very interested, so I'll just finish here.

Song - Drugs (live version from The Name of...)
(close second = Nothing But Flowers).


Tough call on both.
Only time will tell if we stand the test of time.... - Sammy Hagar
Top

The Right Scarfie Profile wrote:I might post a bit more, but I don't know whether would anyone would be very interested, so I'll just finish here.

Anyway, BCB needs to know your opinion on the 'Heads.

It's before my time but I've been told, he never came back from Karangahape Road.
Top

I've discussed them before (I feel a right killjoy saying that!) so I'll just restrict myself to:

That version is perfect.

If I was only allowed one Talking Heads release in my collection, it would definitely be Name of This Band
Top

A tough band for me. They haven't held up well in my estimation. And in truth, I wasn't particularly interested in them when they were active. I liked the singles well enough, but their early albums didn't really register for me. I think I bought most of them some time in the mid 80's because I noticed that everyone else had them. But I never really cared that much.

The one exception was Little Creatures. That album caught my attention. Though everyone else seemed to see it as a bit of a sell out, to me it was the first and only album by them that didn't bore me. Still love it actually. I wasn't at CBGB's, so I could give a flying fuck about the early albums.

Favorite Song: And She Was 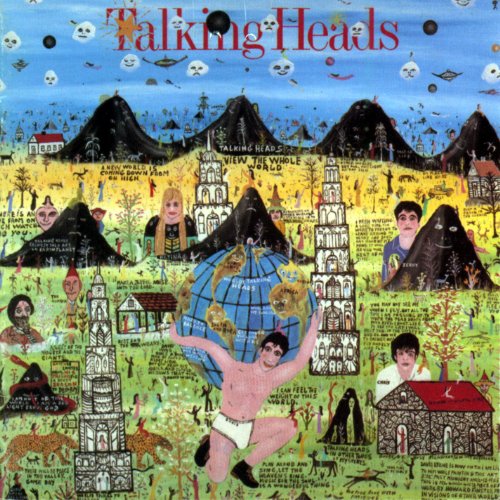 “Remember I have said good things about benevolent despots before.” - Jimbo

Great band, their songs sounded utterly out of place, yet at the right time at the same time!

Wadesmith wrote:Why is it that when there's a 'What do you think of this?' post, it's always absolute cobblers?

Was, is and always will be

I bought this album when it was released and it sounds as fresh 27 years on as it did back then. I played it a couple of weeks ago and decided it was definitely my favourite all-time album. Absolute masterpiece.

I could choose at least half a dozen tracks from fear of music for my favourite track but 'This Must Be The Place (Naive Melody)' gives me palpitations every time I hear it.
Top

Song: Born Under Punches
"I don't want to see a ghost/It's the sight I fear most/I'd rather have a piece of toast"
Top

With them, it's all in the bits. If you listen to 'More Songs About...', there are so many pretty little melodic sections - things that the bass does, for example (Tina Weymouth was a hell of a bassist - see OGWT footage of 'Psycho Killer' for proof), or a little keyboard riff. Their melodies were hardly conventional, the vocalist was 'individual' (and became increasingly irritating) and you could hardly sing along BUT it's all there - these little touches and flourishes - and it thrills.
Top

Sir John Coan wrote:With them, it's all in the bits. If you listen to 'More Songs About...', there are so many pretty little melodic sections - things that the bass does, for example (Tina Weymouth was a hell of a bassist - see OGWT footage of 'Psycho Killer' for proof), or a little keyboard riff. Their melodies were hardly conventional, the vocalist was 'individual' (and became increasingly irritating) and you could hardly sing along BUT it's all there - these little touches and flourishes - and it thrills.

It's a long time since I listened to the first two, but I remember they were quite accessible. Even after they got far more rhythmic and groove based, melody was still generally to the fore. A song like Heaven on FoM is just a great melody, so I never found them difficult really and couldn't see how they'd acquired this reputation. They were experimental, but never lost that pop sensibility.
Top

If we included related albums I'd be tempted to pick Byrne's Rei Momo - one of the few albums I've loved and listened to consistently for years on end.
THE GOOD, THE EBONY & THE IVOR THE ENGINEY. Eastwood/Wonder/Postgate concept album. I WILL PAY YOU to take this away. 07999 284800 (24 hours).
Top

I thought they were tremdously exiting when they first appeared, but they lost me with the 'expanded lineup' business.

I considered Remain in Light a huge disappointment: it was more concerned with rhythm and texture than songwriting. And if a record doesn't have good songs, I tend not to like it.

Anyway, I dropped them after that, so it's all about the first three, although last time I dusted off Fear of Music, I decided it wasn't aging well.

That's my second favorite song of theirs. One of the greatest openings ever.
Top

I think they've held up just fine.
It's all good from '77-'85 and fairly good until '88. They were as good as anyone during the punk era from '77-'81 or so. And while they probably weren't the first to introduce world music to rock 'n' roll they did it better than most.

The new remasters are incredible.

That's my second favorite song of theirs. One of the greatest openings ever.

There's the tiniest thing there: the drums are straight 4/4, no flourishes all the way, until towards the end, where Byrne repeats a verse and there's a little drum roll. And it gives me a kick every time.

'The Girls Want To Be With The Girls' is really rather excellent, too. Wonderful, inventive bass work - she holds back until later (during the bits where he yelps 'watch where they go!' and there's a little instrumental section - fantastic!).
Top
Post Reply
58 posts