They've dug up some more. 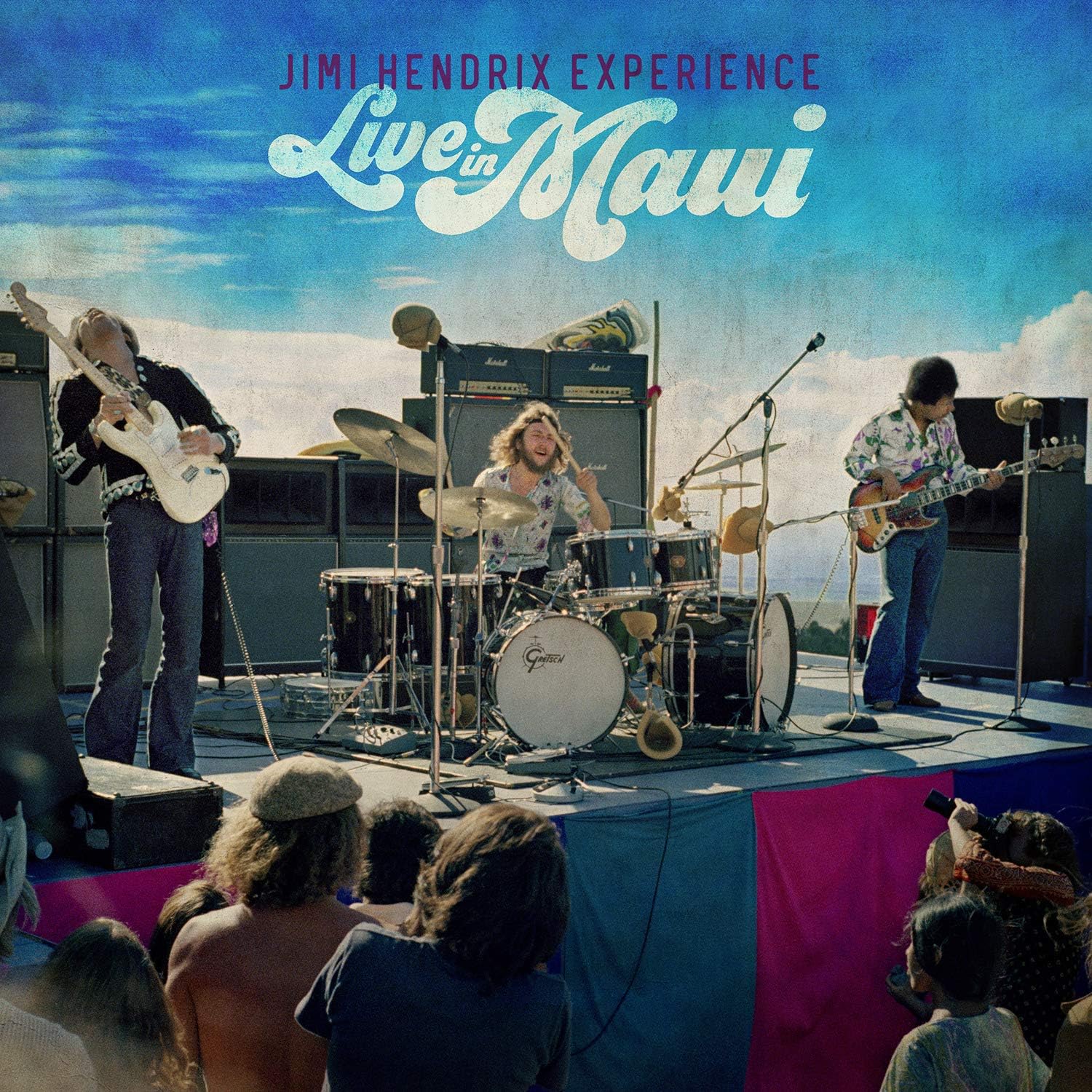 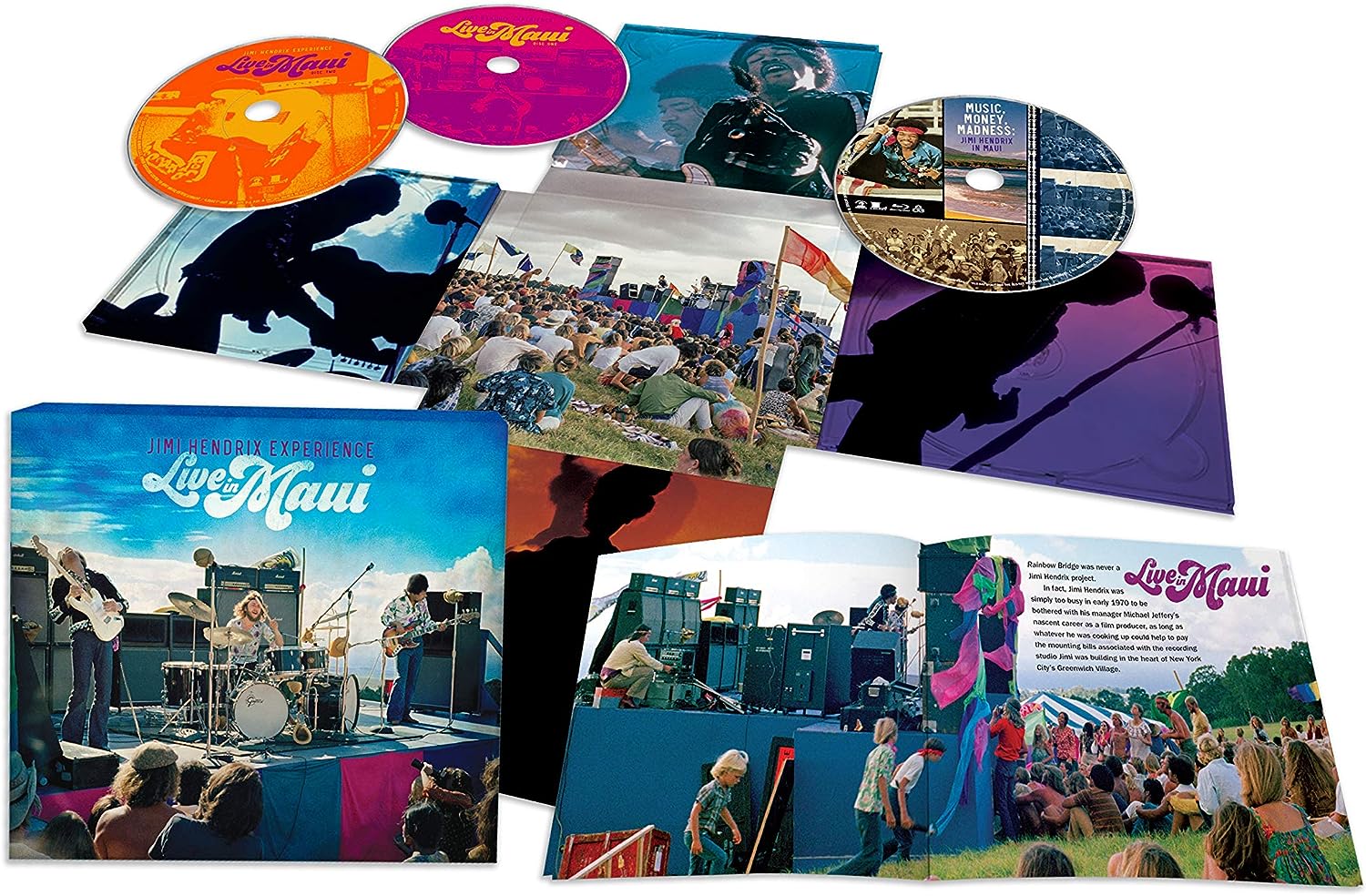 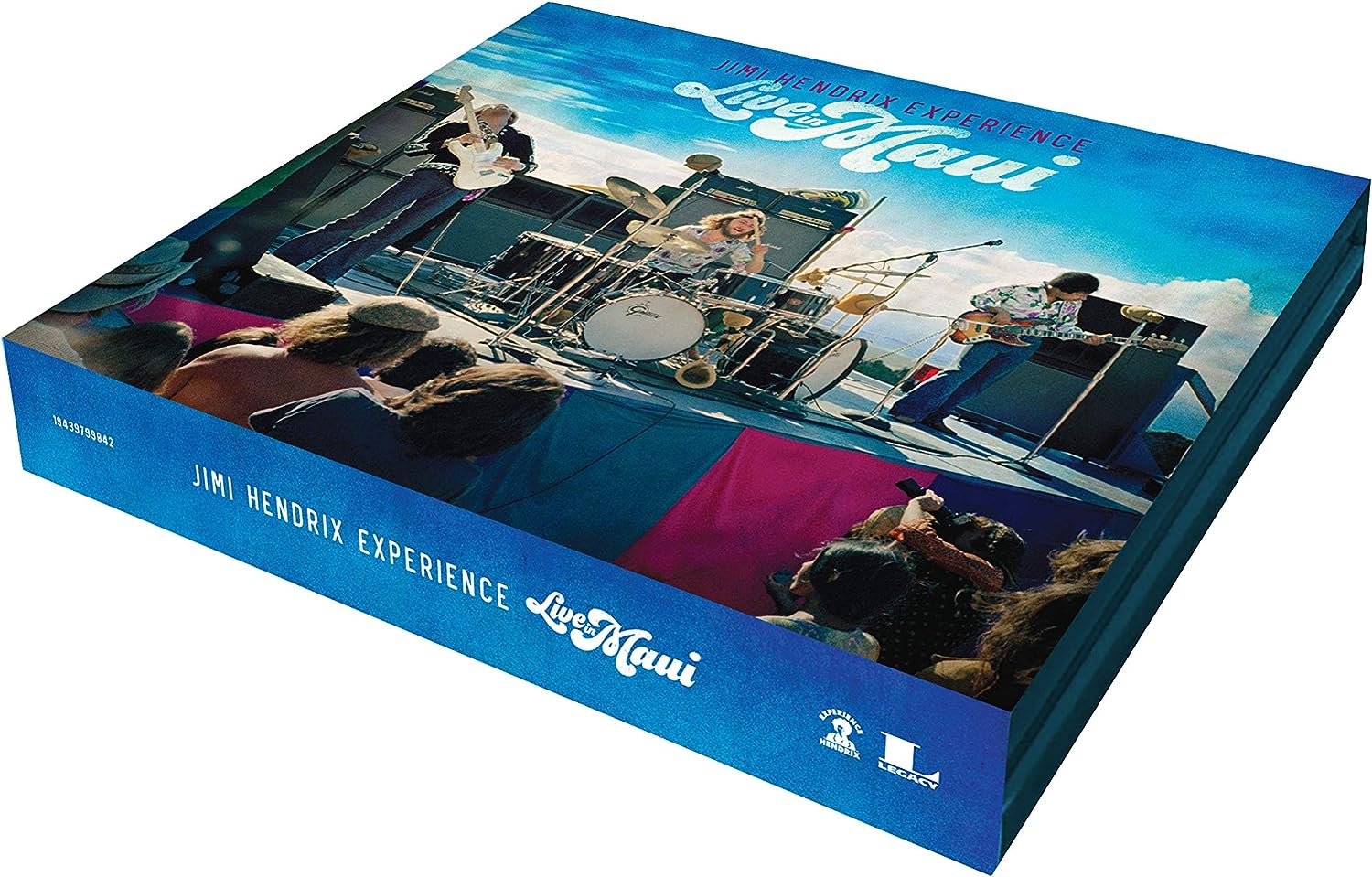 I take it you're excited about this?

Charlie O. wrote:I take it you're excited about this?

No, just struggling to find the tracklisting

This brand new collection couples the new feature-length documentary Music, Money, Madness . . . Jimi Hendrix In Maui with the accompanying live performances on both audio and video. The film chronicles the Jimi Hendrix Experience’s storied visit to Maui, and how the band became ensnared with the ill-fated Rainbow Bridge movie and incorporates never-before-released original footage and new interviews. The Blu-ray includes the full documentary film plus all the footage from the two afternoon performances captured on July 30, 1970 mixed in both stereo and 5.1 surround sound. Also included in the package is Live In Maui – a 2 CD set or 3 LP set featuring Hendrix, Billy Cox, and Mitch Mitchell at the height of their playing powers, newly restored and mixed by longtime Hendrix engineer Eddie Kramer.

MORE INFO
Experience Hendrix L.L.C. in partnership with Legacy Recordings, a division of Sony Music Entertainment, are releasing the brand new feature length documentary Music, Money, Madness . . . Jimi Hendrix In Maui as well as the accompanying album Live In Maui on November 20. The film chronicles the Jimi Hendrix Experience’s storied visit to Maui and how they became ensnared with the ill-fated Rainbow Bridge movie produced by their controversial manager Michael Jeffery. The Blu-ray will include the full documentary as well as bonus features featuring all of the existing 16mm color film shot of the two performances that afternoon mixed in both stereo and 5.1 surround sound. Included in the package will be Live In Maui – both of the aforementioned sets spread across 2 CDs or 3 vinyl LPs, newly restored and mixed by longtime Jimi Hendrix engineer Eddie Kramer, and mastered by Bernie Grundman. “Voodoo Child (Slight Return)” from this historic concert is available today on streaming services; those who pre-order the package will receive a digital download of the track. In addition, there will be various Maui merchandise designs and music bundles available exclusively at the Authentic Hendrix store.

By the middle of 1970, Jimi Hendrix was working on a follow up album to Electric Ladyland with his bandmates Mitch Mitchell (drums) and Billy Cox (bass), headlining festivals and arenas across the U.S. and building Electric Lady Studios in Manhattan’s Greenwich Village. Completing this state-of-the-art recording facility was proving to be a costly endeavor, so his manager Michael Jeffery procured a $500,000 advance from Warner Bros. to fund the remaining construction required to complete the studio. At those same meetings, Jeffery convinced Warner Bros. executives to finance a film called Rainbow Bridge that was to be shot in Maui, in exchange for rights to its soundtrack album consisting of new Jimi Hendrix studio recordings.

Inspired by Easy Rider and directed by Warhol acolyte Chuck Wein, Jeffery’s film centered around the idea of a “rainbow bridge” between the unenlightened and enlightened worlds. It was envisioned to feature everything from surfing and yoga to meditation and Tai-Chi and filmed without the aid of a script or professional actors. It proved to be a rambling assemblage of hippie excess and Jeffery grew concerned that his investment was being squandered. The Experience were already booked to perform a concert in Honolulu at the H.I.C. Arena on August 1, 1970. Chuck Wein, desperate to feature Hendrix in some capacity within the film, devised a plan to film a free ‘color/sound vibratory experiment’ on the lower slope of the dormant Haleakala volcano. Word of mouth about a free Jimi Hendrix concert led a few hundred curious Maui locals to the Baldwin cattle ranch in Olinda where a makeshift stage was constructed and the audience was arranged by their astrological signs. The performance was a success – the trio was at the height of its powers and played two sets flawlessly against a stunning natural backdrop.

In the aftermath of his performance on Maui, Hendrix would return to New York and his work at Electric Lady Studios. He had no further involvement in Rainbow Bridge. He left for Europe at the end of August to headline the massive Isle Of Wight festival and begin a European tour. Tragically, he would die in London on September 18, 1970.

The Cry Of Love, the first album of posthumous Jimi Hendrix recordings, was issued in 1971 to wide commercial and critical acclaim. Jeffery readied Rainbow Bridge and its accompanying soundtrack to be the next release. Despite its Hendrix association, the film was a commercial flop. Rainbow Bridge confused moviegoers, many of whom were under the impression they were going to see a concert film. A scant 17 minutes of haphazardly edited Hendrix concert footage was used in the final cut, and it proved to be the film’s saving grace. Due to technical problems inherent in the original recording of the Maui performances, Mitch Mitchell had to overdub his drum tracks at Electric Lady Studios in 1971 just so those performances could be featured.

Eddie Kramer recalls, “Mitch did a tremendous amount of work on the overdubs. If he didn’t get it in one take, he certainly did in the second one and I was so blown away by his ability to duplicate the parts he had already played! He was determined to fix what suffered on the recordings due to the 50 mile an hour winds because they were playing on the side of a bloody volcano! After Jimi died it took a while before I was able to go back to the closet with all the tapes. Mitch was a trooper with a can do British attitude. It’s all very well to overdub drums, but to do it so you can’t tell, that’s the magic. He knew the material extremely well and it’s a tribute to his sensitivity as a great musician and an equal and willing partner of Jimi’s.”

The posthumously released Rainbow Bridge soundtrack album, prepared by Mitch Mitchell, Eddie Kramer and John Jansen, was first rate and featured classics such as “Dolly Dagger” and “Hey Baby (New Rising Sun).” The album, however, did not include audio from the Maui concert, which may have also added to consumer confusion.

Directed by John McDermott and produced by Janie Hendrix, George Scott and McDermott, Music, Money, Madness . . . Jimi Hendrix In Maui incorporates never-before-released original footage and new interviews with firsthand participants and key players such as Billy Cox, Eddie Kramer, Warner Bros. executives and several Rainbow Bridge cast members, as well as its director Chuck Wein. Their fascinating account tells the definitive story about one of the most controversial independent films ever made.

The documentary sets the proverbial stage for Live In Maui – the two full Jimi Hendrix Experience sets, including breathtaking renditions of crowd favorites like “Foxey Lady,” “Purple Haze” and “Voodoo Child (Slight Return),” as well as then-unreleased songs like “Dolly Dagger” and “Freedom” that showcased the new direction Hendrix was moving toward.

“Jimi loved adventure and there was certainly no shortage of it during his time in Hawaii, a place he also loved,” said Janie Hendrix. “The back story of Rainbow Bridge and these recordings paint a picture of Jimi’s uncanny ability to turn the bizarre into something amazing! We’re excited about this release because it gives the world a closer look at Jimi’s genius.”
Top

Jeffery’s film centered around the idea of a “rainbow bridge” between the unenlightened and enlightened worlds.

This sounds so "not Mike Jeffery," somehow.

I could swear I saw RB a billion years ago - seemed very much a relic of its time, but it was a while ago. My memory is limited, but I did come away thinking it didn't have that much at all to do with Hendrix.

The other thing I'll say (though I've said it before) is that the only thing that separates the Hendrix family from, say, Alan Douglas is, at least they're the family.

Not a bit more selective or protective of the legacy, though. If they've got it, they'll hype it and release it eventually.

I keep thinking the barrel is dry, but maybe it'll never be.

That's certainly basically true, although I do prefer their remasters of the original albums to the ones of the Douglas era. (And at least Janie's never hired session musicians to replace Noel and Mitch and Billy's parts, as Douglas was wont to do.)

I don't really care if they put out every last little dribble - there's obviously an audience for it - and I've enjoyed a few of the releases very much. But when they hype something like People, Hell And Angels or Nellies Of Vaptune as a "lost album" (implying that this is a completed work that Jimi wanted to put out at the time but somehow didn't), I see red.

Pool Hall Richard wrote:Inspired by Easy Rider and directed by Warhol acolyte Chuck Wein, Jeffery’s film centered around the idea of a “rainbow bridge” between the unenlightened and enlightened worlds. It was envisioned to feature everything from surfing and yoga to meditation and Tai-Chi and filmed without the aid of a script or professional actors.

Charlie O. wrote:I take it you're excited about this?

I sure hope the concert recording is superior to the bootleg I have.
Where would rock 'n' roll be without feedback?
Top

There's a wonderful amateurishness about that - almost looks like Jimi is surrounded by a Will Farrell pastiche.
Haven't heard a live version of Voodoo Chile yet that I've liked.
Smilies are ON
Flash is OFF
Url is ON
Top

There's a wonderful amateurishness about that - almost looks like Jimi is surrounded by a Will Farrell pastiche.
Haven't heard a live version of Voodoo Chile yet that I've liked.

I think the version they perform live on the Lulu BBC show is superb. Even Noel gets busy on bass.
Top

Be nice with the Maui Wowee
"When the desert comes, people will be sad; just as Cannery Row was sad when all the pilchards were caught and canned and eaten." - John Steinbeck
Top