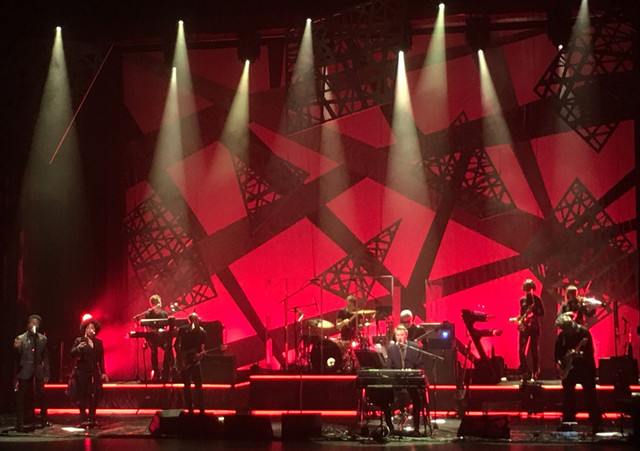 Great night last night at the lovely old Majestic Theatre in downtown Dallas
Great mix of old and new Roxy classics and Ferry solo - things started off pretty low key but gradually built and the last half was all killer.
"Dream home" was stunning. Won't spoil anything for those avoiding setlists online like I did, will just say you won't disappointed , some great Roxy classics were present.
Wasn't till halfway thru the show I realized the slightly disheveled guitarist stage right was Chris Spedding, who supplied suitably wonderful guitar thru out
Top

Saw him a couple of times in the last ten years or so and both times he was excellent.

Glad you had a great show. Gotta love Chris Spedding. He was magnificent on Donovan’s Cosmic Wheels Album.
Top

soundchaser wrote:Glad you had a great show. Gotta love Chris Spedding. He was magnificent on Donovan’s Cosmic Wheels Album.

soundchaser wrote:Glad you had a great show. Gotta love Chris Spedding. He was magnificent on Donovan’s Cosmic Wheels Album.

Great on a motorbike, as well.
Top

Mike Boom wrote:Setlist
India
The Main Thing
The Space Between
The 39 Steps
Out of the Blue
Slave to Love
While My Heart Is Still Beating
Don't Stop the Dance
Just Like Tom Thumb's Blues
Boys and Girls
Dance Away
My Only Love
Take a Chance With Me
Bête Noire
Can't Let Go
In Every Dream Home a Heartache
If There Is Something
More Than This
Avalon
Love Is the Drug
Editions of You
Do the Strand
Let's Stick Together

Hmm! Lucky you. I would especially have loved to have heard If There Is Something & Editions Of You.
Top

Looks like about the same setlist as last night (to be honest, I don't recognize at least a third of the songs by name). I am not steeped in solo Ferry and only willingly gave it a go in anticipation of this show.

I enjoyed the show very much and it was more interesting than anything I've seen in recent years. And I think I left more interested in Ferry and more curious about his solo records than before. But I can't say that I was ever really knocked out. And it may be because he is 70 whatever, or it may be that it simply isn't what he does. After all, we were all notified in advance that the venue would not be operating at full A/C capacity at the request of the performer to vouchsafe an optimal vocal performance, and his voice isn't what it was, but no one expects that. It seemed, apart from a few sort of tough Roxy jams, that we were on a surreal Eurotrash cruise ship, led by a particularly suave entertainment director and an uncommonly accomplished band. It was similar to my experience seeing Wilco in Dallas a few years back where the performance was totally bloodless, and it seemed like Jeff Tweedy was flying a big spaceship. Not as off-putting for Bryan Ferry, but weirdly disconcerting all the same. The best bits were where you could hear his keyboard playing or, though the last thing I went to see, when he got out his harmonica. Those imperfections mixed in with all the sharpshooters were great. The mirror balls were also exceptional.

My review from when I saw him last year. Top tip: Do NOT get in between Bryan and his fans to take photos if you value your life.

Watching the violin player go crazy at the end of "Out of the Blue" was a particular highlight.
Particular lowlight: getting asked to move when dancing to the back of the seats. Twice. I was literally ...Banned From the Roxy!
You come at the Queen, you best not miss.

Minnie the Minx wrote:Watching the violin player go crazy at the end of "Out of the Blue" was a particular highlight.
Particular lowlight: getting asked to move when dancing to the back of the seats. Twice. I was literally ...Banned From the Roxy!

saw the show a few weeks ago. Agree with the violin player going all out on Out of the Blue. Yes my favorite venue these days is the Capital Theatre here in Westchester, NY. When the floor is a seated show(Ferry was) at least they let you stand on the side and dance away. I tend now to get a side seat so I can get up every once in awhile to dance or bop. In venues that don't allow for this my new idea is to tell security that my knee can't sit a whole show and I need to stand every once in a while.

I thought it was a great show and was surprised because I had low expectations for some reason. Love how he mixed up the Avalon album instead of playing it straight thru. For the first few songs I was looking at Chris Speeding and told me friend that is someone but can't think who? About half way thru I figured it out. Thought Chris did great job, the band was all pretty good.